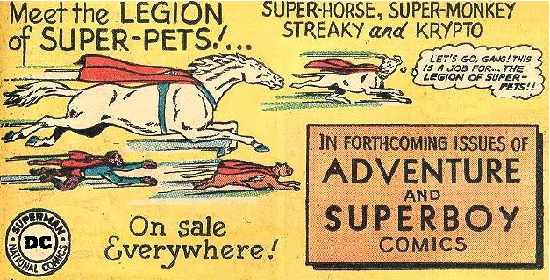 My family went to the Turtleback Zoo yesterday – great zoo, by the way, may I suggest a visit if you live anywhere near West Orange, New Jersey – and driving home I thought about the Legion of Super-Pets. A very strange connection to make, but that’s the mysterious way in which my mind works.

You young ‘uns out there (very much) probably don’t know what I’m talking about, but once upon a time in a galaxy far, far away, in a time that would come to be called the Silver Age, incredible tales of fantastical dreams and magical possibilities were told – of lost planets, of cities and their populations living inside bottles, of an alien and his doomed love for a mermaid, of traveling through time in a bubble, and of astonishing heroes gifted with the powers of the gods. And among these tales there was the story of these heroes’ pets, a band of animals also gifted with the powers of the gods, who one day saved the planet Earth from the evil Brain-Globes of Rambat.

Okay, I know, a little too much purple prose there for these cynical times.

Created by Jerry Siegel and Curt Swan and first appearing in Adventure Comics #293 (February 1962) – and no, that’s not a Twitter hash tag, kids – the Legion of Super-Pets consisted of Superboy’s dog, Krypto; Supergirl’s cat, Streaky, and her horse, Comet; and Beppo, a Kryptonian chimpanzee who had been the “test pilot” for one of Jor-el’s early trial flights of a rocket before the destruction of Krypton.

The concept of a Legion of Super-Pets could never sell today, unless the innocence of that Silver Age was twisted into something brittle and corrupted, sarcastic and mocking, distrustful and dirty. Krypto gets rabies, kills Superboy, and goes on a mad rampage, finally dying in a horrific epileptic fit caused by the disease. Comet, a pedophiliac centaur turned into a horse by the Goddess Diana when he raped one of her Vestal Virgins, is now ridden by Supergirl instead of him, uh, “riding” her. Streaky is a malevolent cat vomiting up radioactive hairballs all over the Earth. And Beppo hunts down and kills the poachers who killed Dian Fossey.

I actually approve of that last part. Go, Beppo!

It’s actually not a bad idea. Maybe I’ll work on it.

Sometimes it’s a little scary, the things my mind comes up with.