The Black Bat Pulps to be Reprinted 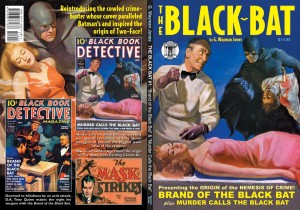 With Sanctum Books wrapping up production on reprinting every Doc Savage pulp with their 87th volume, the production schedule will see the addition of The Black Bat. The first volume will reprint “Brand of the Black Bat” and  “Murder Calls the Black Bat”. According to the solicitation copy:

Sanctum Books presents the 1939 novels that introduced the caped crimebuster whose adventures paralleled Batman’s and inspired Two-Face’s origin, written by Norman A. Daniels as “G. Wayman Jones” for future BATMAN editors Mort Weisinger and Jack Schiff. First, doomed to darkness by a murderous acid attack, D.A. Tony Quinn makes darkness his weapon with “The Brand of the Black Bat.” Then, “Murder Calls the Black Bat” into a deadly war against corruption as Tony Quinn battles to prevent the biggest jewel heist of the century! GOLDEN AGE OF COMICS BONUS: the debut of The Mask from Nedor’s Exciting Comics #1. This instant collector’s item showcases the classic color pulp covers by Rudolph Belarski and Emery Clarke and the original interior illustrations by Harry Parkhurst, with historical commentary by Will Murray relating how a lawsuit with DC Comics was narrowly averted. (Sanctum Books) 978-1-60877-183-7  Softcover, 7×10, 128 pages, B&W, $14.95

The long-running publisher has cracked the 200 mark in their flagship reprint series of The Shadow.