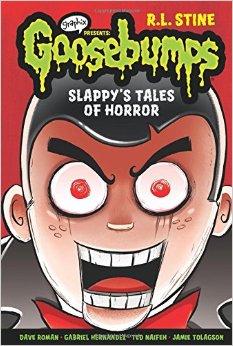 Originally released in black and white nearly a decade ago, the resurrection of R.L. Stine’s Goosebumps franchise has prompted Scholastic Graphix to collect the stories once more at Goosebumps Graphix. The first of these, Slappy’s Tales of Horror, are comic book adaptations of YA novels written in the early 1990s.

Dave Roman, the most cartoony of the quartet of artists, provides the interstitial pages as Slappy, the living dummy, acts as host because every horror anthology needs a host (thank you Bill Gaines). The stories offer up a variety of terrors from the possessed dummy to the werewolf but in keeping with Stine’s template, each comes with a few twists to keep people guessing.

There is some genuine terror hidden within each story but being a graphic adaptation of prose, and given a more limited page count, things fall to the wayside, notably any semblance of characterization.

Gabriel Hernandez follows with “The Werewolf of Fever Swamp”, a family tale where man and beast are examined. His art is sketchy but works to set the mood, notably in the woods.

“Ghost Beach” comes courtesy of Ted Naifeh and deals with ghosts and ancestors and ghastly doings.

Finally, Roman offers up “Night of the Living Dummy” which is about rivalry, sibling and wooden alike. His style feels out of place compared with the others but he does an admirable job with the hoary material.

All four come freshly colored by Jose Garibaldi who uses a rich palette without getting garish.

If you like the series and can’t wait for the film, this should help.