REVIEW: Justice League: Attack of the Legion of Doom 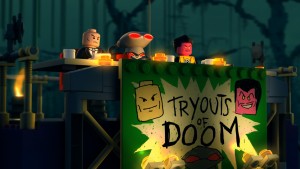 I remember when Lego wouldn’t dream of sullying their blocks with licensed characters. Oh how times have changed. Next to Pixar films, there are few funnier takes the super-hero realm than the animated Lego-style adventures of familiar heroes and villains.

Clearly, Lego and Warner Home Entertainment know when something’s working because next week they’re unleashing the direct-to-home-video animated movie Lego DC Comics Super Heroes: Justice League: Attack of the Legion of Doom. The Digital HD can be streamed now and the DVD will be out next Tuesday.

This is the fourth such outing — Lego Batman: The Movie – DC Super Heroes Unite, Lego DC Comics: Batman Be-Leaguered and Lego DC Comics Super Heroes: Justice League vs. Bizarro League — with several actors reprising their vocal roles, forming a Lego Universe continuity. Back for another go round are Mark Hamill as The Trickster, Nolan North as Superman, Khary Payton as Cyborg, John DiMaggio as The Joker, Josh Keaton as Green Lantern, Kevin Michael Richardson as Black Manta, Grey Griffin as Lois Lane and Tom Kenny as The Penguin. 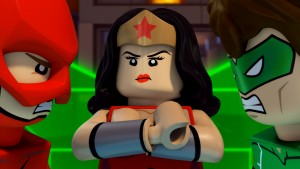 The combo pack comes complete with a Blu-ray, DVD, and Digital HD copy along with a collectible minifigure of the Trickster (as is only appropriate given Hamill’s resurgence this year, first in Kingsman, then Flash and later in Star Wars: The Force Awakens).

We open with the JLA being a fairly new concept, one embraced by the residents of Metropolis but leaving Lex Luthor less than thrilled.  The only way to stop a force of good is with an even stronger force of evil so Luthor begins a recruitment drive (the process is quite entertaining). And so is born the Legion of Doom. Their first goal is to attack the top-secret government site, Area 52, but they know this will bring out the Justice League and Luthor is prepared.

It’s hard to take Lego heroes and villains fighting seriously, but there is plenty of nice action that will delight the 6 and up gang. Jim Krieg’s script keeps things moving along and juggles the large cast without confusing the younger segment. Rick Morales’ direction is also a plus as things never bog down.

The digital transfer is crisp and clean with good sound so the audience will be enchanted. In addition to the 72-minute fun escapade, there is the Blu-ray bonus feature “Click, Zap, Boom! Creating the Sound Design”.