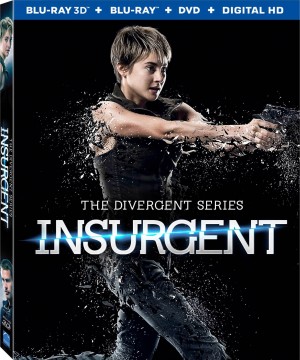 There’s a lot of action and running and fighting and things blowing up in Insurgent, the second installment of the films based on Veronica Roth’s Divergent book series. It has an attractive, well-pedigreed cast. It looks slick with top-notch CGI effects. It should be a major crowd pleaser.

Instead, it’s heartless and heartless, emphasizing but the characters and their emotions. The film opened this spring and did well enough and the Combo Pack (Blu-ray 3D, Blu-ray, DVD, Digital copy) is out now from Lionsgate Home Entertainment. The film itself earned $295.2 million worldwide, just enough to greenlight the by now mandatory two-part finale, Allegiant, coming March 18 an, 2016 and March 24, 2017.

The first film introduced us to yet another impossible to believe dystopia where society has been enclosed in a walled city of Chicago and people are born into one of several classes. Those who defy categorization are called “divergents” and are hunted, ostracized or both. Our protagonist, Tris (Shailene Woodley), of course is one of those but she’s even more special: she’s 100% divergent, making a sought after gem. And much of the film focuses on the hunt to obtain her so she can obtain an object conveniently unearthed from her family home. Much as Katniss Everdeen struggles against being a symbol in The Hunger Games books and movies, Tris is a reluctant hero, forced by circumstances, manipulated by both the spectre of her dead mother (Ashley Judd) and the cool Jeanine Mathews (Kate Winslet).

She’s not alone, accompanied by Four (Theo James), who is forced to admit his love for her when both endure truth serum sessions, watched by the impassive Daniel Dae Kim.

Back to complicate matters here and there are her brother Caleb (Ansel Elgort) and troublemaker Peter Hayes (Miles Teller).

Once Tris sacrifices her freedom to stop Jeanine from killing people, she confronts her worst nightmares which turn out to be herself and the sequences are visually interesting but also too reminiscent of The Matrix to be fresh enough to sustain watching. The lack of humanity given the cast makes the film flat and boring when it should be engrossing. There’s a reason this series of books was made into a film series: they sold a ton and the reason they sold a ton is because Roth made them passionate and interesting figures.

Woodley gives the best performance given the range of emotions she goes through but Teller makes his character feel the most alive of the ensemble. Watts, Kate Winslet, and Janet McTeer lend veteran talent but are given little chance to do more than emote.

Sadly, the screenplay feels cobbled and compromised which explains the trio of credited authors, Brian Duffield, Mark Bomback, and Akiva Goldsman, who should know better. There are no surprises here, and too many climactic moments occur with predictable results, so you wonder what happened? Maybe it’s the absence of director Neil Burger, who was replaced by Robert Schwentke who did a far superior job with Red. Unfortunately, he’ll be back for Allegiant, but there’s also a chance for redemption.

The digital transfer is excellent so everything is sharp, colorful, and fun to watch at home. It is paired with a Dolby Atmos soundtrack although on my soundbar it decoded as a Dolby TrueHD 7.1 track but was just fine.

For a lackluster and disappointing film, it comes chock full of extras beginning with an Audio Commentary from Producers Doug Wick and Lucy Fisher, who offer little in the way of fresh insights. Next is Insurgent Unlocked: The Ultimate Behind-the-Scenes Access (1:56:32) letting you watch separately or as a picture in picture option. Every aspect of the production is covered, including Building a Bigger World, Creating the Big Screen Experience, Exploring the Factionless, From Factionless to Candor, A New Landscape of Weapons and Stunts, Composers and Simulators, and A Fight to the Finish. Additionally, you get From Divergent to Insurgent (5:09) as cast and crew talk about how the two connect; The Others: Cast and Characters (3:40); Anatomy of a Scene: The Train Fight (4:01); The Peter Hayes Story (2:40); and Divergent: Adapting Insurgent to the Screen (4:00).