Dennis O’Neil: Justice Society – Forward Into The Past! 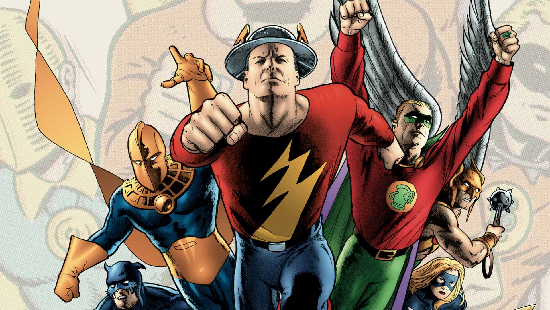 Back from a mission, the particulars of which I am not at liberty to divulge though I can reveal that it involved a food store, and… Look! Someone has deposited a package on the front stoop. A friend? An enemy? One of those uniformed people who drive around the neighborhood in trucks? Make haste! Slit the tape, fold back the flaps, and…

Well, look at that. A book. We already have a lot of those, but hey, always room for another, especially if it’s a handsome hardcover titled Justice Society of America: A Celebration of 75 Years. Seventy-five years already? They grow up so fast…

It must have been a no-brainer, all those years ago. Superman was a success. Ditto Batman. The rest of Detective / All-American Comics’ cadre of costumed do-gooders were doing at least okay, if not better, and if those mysterious beings out there beyond the office walls – call them “readers” – like superdoers in single doses then they’ll go nuts for a bunch of such heroes in the same magazine and – here comes the challenge for the editorial department – all of them working on the same problem.

The added benefit, as Roy Thomas observes in his informative and lively introduction, was that a comic book like that could showcase less prominent characters, test whether they might be popular enough to warrant further use.

So get busy! Get that new comic book, dubbed The Justice Society, out of our collective imaginations and onto the newsstands!

And so they did. The JSA, at first a quarterly, was soon promoted to bi-monthly status and continued to grace the nation’s magazine venues until 1951, when comic books as both popular entertainment and profit centers entered their dark age, a period when they barely survived as publishing enterprises.

That tale, sad though it is, had a happy ending when comic books, and particularly superhero comic books, were reinvented and began flourishing. (You wouldn’t be reading this if that hadn’t happened.) The JSA came back somewhat altered and rechristened The Justice League of America.

The JLA was one of my first assignments when I went to work for what had, by then, become DC Comics. I don’t think I knew the size of the bite I’d taken when I took the job. It can be challenging to conjure up a worthy opponent for a single super person and thus provide conflict and drama and all that good stuff. Writing a book like JLA the writer has to provide woes for seven or eight or more. But, as the volume we’re discussing proves, writers and artists have been doing that, doing it entertainingly, for three quarters of a century.

Once a year, Julie Schwartz would revive the JSA, who, you will be happy to know, were living in another dimension, and team them with their modern counterparts. I did one of those stories, which is how I come to be represented in the volume we’re discussing and why I got copies of it, and there you go, full and unnecessary disclosure.

I’m glad to see my work in such righteous company.