REVIEW: Sunny Side Up 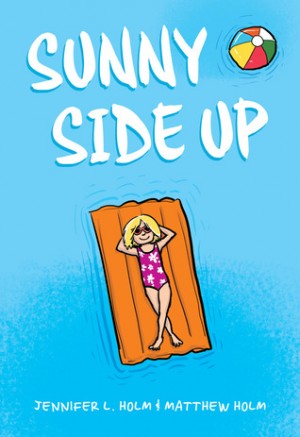 Unlike so many of the offerings from the Scholastic Graphix line, this one requires paying attention to the structure as we jump around both time and place. The semiautobiographical memoir brings the timelines together as Sunny Lewin experiences her brother’s self-destructive nature and is packed off to Florida. There, her grumpy grandfather doesn’t seem to know what to do with her, at first. As a result, she goes wandering around the 55+ community and finally encounters Buzz.

Her developing friendship with Buzz not only gives her someone to hang out with, but also introduces her to comic books. It’s interesting to note which 1970s titles she gravitates to, starting with David Michelinie’s run on Swamp Thing before discovering Batman, Spider-Man, the Hulk and others. In time, they begin earning money finding missing cats and later missing objects and people as they glimpse what senior life holds for them.

The sunshine, swimming, comics, and odd neighbors are far more preferable than being home where her brother Teddy has chosen to enmesh himself with drugs, spiraling downward until he literally hits bottom. Also, she gets to crack through her grandfather’s tough façade and connects him better to his own community.

Interestingly, the Holm siblings explore their past with a certain level of fondness, keeping the storytelling simple without hiding the complex issues at play. They’ve previously partnered on two series: Babymouse and Squish. Here, Lark Pien provides a cheerful color palette in keeping with the title and location.

A satisfying read, the book addresses several strong issues without moralizing or dwelling on only the sad portions. Sunny’s maturity in the face of adverse conditions makes for a strong role model for the readers.