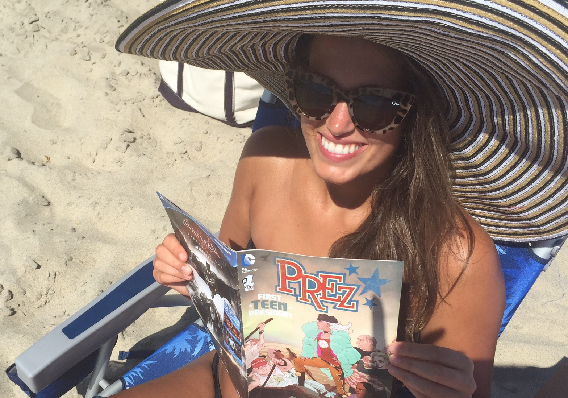 Pop Culture, especially that unique Pop Culture flavor of comics and graphic novels, validates itself with massive box office wins (Avengers: Age of Ultron is the 4th best performing movie ever), television triumphs (The Walking Dead, Gotham and The Flash are amongst the most watched shows on their respective networks) and licensing successes. When even a character like Ant-Man is a licensing juggernaut you know the business community and the world at large is noticing the spending power of Pop Culture.

It wasn’t always this way. For a long time, passionate fans knew that comics opened the floodgates of the imagination with fantastic writing and artwork. But we simply couldn’t convince the rest of the world. So instead, fans learned to leverage the concept of collectibility and value as a means of validation. The Overstreet Comic Book Price Guide, celebrating an impressive 45th anniversary this year, helped to start it all. Fans could point to the astronomical values assigned to rare comics, like Superman’s first appearance in Action Comics #1 or Spider-Man’s debut in Amazing Fantasy #15 and say “See? This is important! Someone is willing to pay a lot of money for this!”

One downside is that an entire generation takes their comics too seriously. And I admit I’m one of these folks. It’s difficult for people like me to read a comic and then roll it up my in back pocket. I can’t seem to bend back a page, for fear of the dreaded spine roll. And while I love to read on vacation – taking a comic to the pool or the beach is risky business. What if they get splashed? Any defect might cause the potential value to plummet. Today’s “mint condition” treasure could become tomorrow’s “poor grade” loser simply because of an irresponsible reading experience.

Logically, we all know that that most of the comics we read won’t increase in value to astronomical heights. Ever shop the $1.00 comic bin? Seems like every store has one. And many fans can’t bear to sell their collections, so their collections will never attain a real market value. But still – the need to preserve a comic’s condition is baked into our collector’s DNA.

Well, it’s time to unlearn that! I’m working hard to prune my oversize collection, but that’s a whole ‘nuther column. It’s time to unlearn the tyrannical tradeoff of keeping comics in pristine shape, especially if the trade-off means enjoying them less.
So for the past few summers, I’ve made it a point to bring Silver Age comics, some of my favorites and prized classics from the sixties, to the beach. I read them in them in bright sun. They might get sand blown between the pages. Fingers greasy from suntan lotion might leave an occasion stain. Some of that wonderful Jersey Shore ocean might even inflict water damage on them.

I’m still not 100% there. It takes a little while for me to get used to the idea. But I’m getting better.

Today I’m issuing my Summertime Comics Challenge. I want you to read some comics on the beach, at the campsite, by the edge of the pool or even just in the backyard by the grill. Forget about the bags and boards. Forget about the condition. Forget about the collectibility – just enjoy them. And send me a picture. I’ll publish the best ones here at the end of the summer. I’m looking forward to seeing some genuinely happy faces… if you too can unlearn collecting habits and enjoy your Pop Culture a little bit more.

One more thing: you can send your pix to me at Ed.Catto@BonfireAgency.com, and don’t be shy about sharing them with #SummertimeComics .