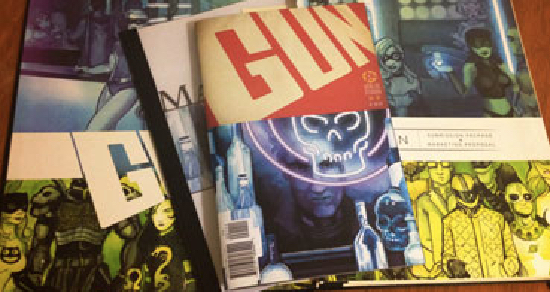 We get a lot of review copies here – by mail, email, and in-person at conventions. That’s a nice thing, and it’s quite possibly the reason why my daughter went into the comics business. But since we can’t review a fraction of what we get over the transom (although we did just add Philip Sandifer to our review crew; hi, Philip!) I often feel a bit sad that the creator/publisher/talent went to the bother and the expense.

But every once in a while something will catch my eye and if the planets are properly aligned and I remembered to sacrifice the proper animal to the proper authority, I’ll give it a read. If I like it, I might even give it a plug, for what that’s worth. There’s too many good projects out there that don’t get enough exposure, so I rarely spend my time blithering about what is, in my never-humble opinion, not worth it.

The more inspired and better-healed comic book shops racked the first issue of Gun today, created, written, drawn and hand-painted by Jack Foster. Nice package, great paper, a quick flip-through did not scream “well-healed wannabe” and – most impressive – his name wasn’t even on the cover. What the hell; it wasn’t going to be a selling point so he smartly used the space to attract the readers’ attention.

But what impressed me most of all was the cover letter, which consisted of four brief paragraphs that covered all the bases one should cover… including the mission statement. Jack’s working outside of Diamond Distribution, to quote said letter, and he’s got an interesting blog to prove it.

I have no problem with Diamond, outside of the fact that they’re a monopoly. I’m still a bit in awe, after all these years, of the way Diamond put that monopoly together. But going out there on your own despite the many failures of organizations much larger than Foster’s “Reckless Eyeballs Press” – that really captures the true independent spirit and, damn, this planet needs as much of that as it can get.

So, good for Jack and his cohorts. I sat down to read Gun #1 with a positive, hopeful attitude, and I was not disappointed. It’s a comics noir story about a super-villain and his super-villain friends and how they work together, how their society operates, how they bond and the limits of those bonds. Yes, this is ground well-trod. Big deal. The whole superhero thing has been well-trod for over half a century, and that hasn’t stopped people from coming up with great stories. The art is decent but the storytelling is quite good, and Foster delivers some extremely clever dialog. His hand-painted color is also quite good, although in a couple places it prints a bit dark. Gun could probably use a slightly stronger touch from the editor, but I play a professional editor on teevee so of course I’d feel that way.

The book costs $4.99 over the counter at those inspired comics shops that can afford to take the risk on an unknown. It’s also available online in both hardcopy and digital; the latter goes for $2.99.

If I didn’t enjoy Gun #1, I’d be writing about something more worthy – like my cats, which is always a Net-pleaser. I think you should check it out; even if you hate it, at least you’ll know why and you’ll have given some support to all those garage writers and artists who, as it so happens, hold the future of the comics medium in their hands.

Looking forward to the next issue, Jack. And thanks for sending it to us.