Marc Alan Fishman: What To Do At A Bad Comic Con 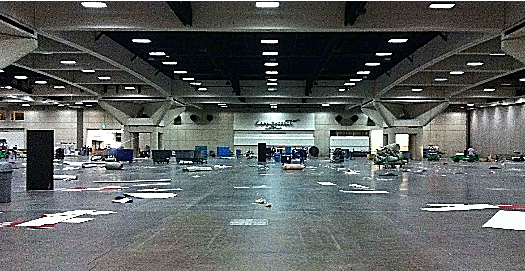 A week ago Unshaven Comics had the pleasure to attend a convention in flux. The promoters – good, honest people – take this show to several smaller town and cities across our neck of the woods over the course of the year. I won’t divulge their name, nor the specific towns. Suffice to say the con was more or less akin to the conventions of yore versus the now-typical megacon. A single space occupied mostly by vendors, with a solid dozen or so independent craftsmen, creators, and miscellaneous geek-adjacent business-folk.

To their detriment, the convention grew from a single day endeavor to two. In doing so the minimal crowds that came were basically split. Twice the days meant twice as much transportation costs with little in the way of measurable sales increases. And because I like to be fully transparent about the plight of the indie creator: we sold less books at this show than the same show put on for a single day back in December.

It was, to Unshaven Comics’ till, a bad show.

But I’m forever an optimist – looking for a silver lining even when I need not go through the motions. When a show is not up to snuff, what do you do if you’re there to make money? Some slash their prices and attempt to break even with their sunk costs. Others cut bait and go home early. Unshaven Comics subscribes to the “make lemonade” methodology. We dig our heels in, enjoy the few victories we get, and we use the time to make strides at future shows.

So, what of those few victories? For us this past weekend, it was being able to take the time to really get into a deep discussion with someone who bought our book. It was having the ability to produce some extra sketch cards to fill our sample books to entice future commissions. It was being able to get up and talk to plenty of the other artists and vendors in attendance and network. In doing that, I now have a pile of business cards with potential for adventures down the line; a podcast looking to have us on right when our future crowdfunding campaign launches, a vendor who will be able to produce us some amazing cosplay materials, another who can assist us in producing some affordable up-sell merchandise, and lastly an artist who committed to producing a pin-up for the aforementioned campaign. Now, I’d certainly call that a win in the face of a loss!

If I can digress fully (kinky, eh?), allow me to end on an anecdote that reassures me that my commitment to being an indie creator will always be about the journey not the destination. During the show, a little girl came poking around my side of the table, as I was coloring in a sketch card. “Excuse me. Could you please make me a Fennekin?” One quizzical look later, and her mother came to translate. Fennekin is a Pokemon, and her daughter wanted a sketch card. Money was exchanged, and I assured my li’l fan that it’d take about 45 minutes for me to complete it.

“May I please stay and watch you draw?” she cooed. Oy the feels! “Of course!” I exclaimed. She then stood, stiff as board, locked to my left side, not even a foot from my drawing board. I propped my iPhone up with a reference picture, and she helpfully tapped it “awake” anytime the display dimmed. Whilst I tinkered away at her card, she proceeded to tell me everything and anything I wanted to know about Fennekin.

When I finished the card, I happily handed it over. She beamed from ear to ear, and thanked me. She would never have cared about The Samurnauts. She wanted a piece of art of her favorite cartoon. I obliged. And in doing so, I know that for at least a little while… she will treasure something for far longer than it ever took me to make. It’s a small and important victory not for my ego… but for my spirit. The joy I see in my own son was reflected back in a girl who herself was likely only three years older than my own boy. This moment to her, will be one for Bennett in hardly a blink of an eye.

With a genuine moment like that to cherish, who am I to say it was a bad show at all?