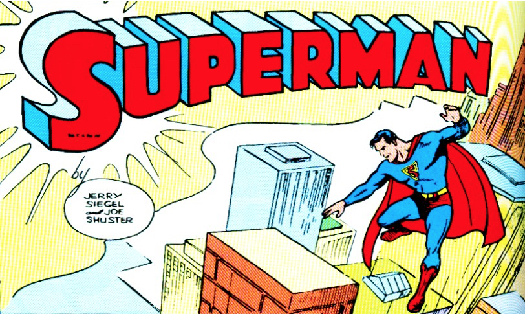 Yeah, I’ve heard that Superman is super smart as well as super all the other stuff he’s super at, but I don’t know. I can’t recall a single instance where he thought his way past some obstacle. More likely, he’d just uproot the obstacle and toss it to somewhere like Jupiter. Maybe he is really bright and it’s just easier to toss a problem to Jupiter than cogitate about it. But the question is there.

I mean, if he’s so smart how come he can’t remember his own name? You ask how I know that he can’t? (Maybe you’re not so smart?) It’s that big S on his chest. The darn thing serves on purpose other than that of forcing script writers to jump through hoops explaining why it’s there. And why is that? Could it be that the S is a prompt for those times, after a long bout with Kryptonite, say, when the Man of Steel needs a little help in the memory department. A quick glance at the torso and… oh, yeah, S. I’m Superman. Now if only I could recall what I’m faster than…

Allow me to escort you out of the world where we treat Superman like someone who actually exists and into the present moment, where/when we will let ourselves wonder why Joe Shuster, the guy who did the visual part of creating Supes, decided to put the S where it is in the first place. I looked at the earliest drawing I could find and yep, there it is, the S, encased in something that resembles an arrowhead. Present at the beginning, albeit in a pre-evolved form. What inspired teenage Joe to add it, that Cleveland summer’s day some 82 tears ago?

Both Joe and his writer-collaborator, Jerry Siegel, are gone and, I think, they weren’t nearly as often interviewed as they should have been, so, barring some new information, we’ll probably never know what was in Joe’s head. The best guesses I’ve heard regarding superhero suits, is that they were inspired by circus costumes and/or the illustrations in the science fiction pulps that Joe and Jerry almost certainly read.

Seems reasonable. But: no thoracic initials in those clothes. And none on the Phantom’s wardrobe, either. The Phantom’s creator, Lee Falk, later said that the Phantom’s outfit was inspired by the movies’ Robin Hood. Wherever it came from, it certainly is a recognizable superhero costume. But no dorsal P. Falk debuted the Phantom in 1936 and so his masked jungle dweller beat Superman into print by about two years. But Superman was created as a newspaper strip in 1933 and languished until Joe and Jerry peddled it to Max Gaines for use in one of those new funny book magazines. So the Phantom likely didn’t influence Superman and vice versa.

But the meme Joe and Jerry created, the costumed superman, influenced dozens – hundreds? thousands? – of later creations, a number of whom had something on their chests. No initials: that element of the meme was not widely imitated. But lanterns, lightning bolts, bats, stars, and my favorite, sported by a character named E-Man, Einstein’s E=MC2. Yep, world’s most famous equation, right there below his collarbone.

Ah, but does any of this mean anything? Well, does it?