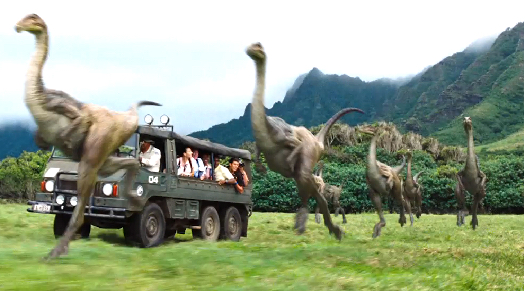 Many, many months ago at Toy Fair they announced that a major trend for 2015 was dinosaurs. This was due in part to the upcoming Jurassic movie. Now, fast forward to last week. I bit the proverbial bullet and went to see Jurassic World.

I admit I didn’t have high hopes for the movie. Let’s be honest: you don’t really go for the plot. Almost everything people are complaining about is true. Poor character development mixed with the misogynistic undertones of the 1970s and the anti-war/government sentiments make for a poor plot. Not to mention, Chris Pratt is wearing eyeliner the whole movie which looks so weird.

Even through all of that, when the dinos came on screen, I loved it. I loved every poorly plotted minute of it.

After the fact, in chatting with some friends, I began to realize part of the reason I loved it was because I saw the original film at the right age. The original Jurassic Park made the happy feelings I had from watching the new one, only because they reminded me of what I felt as a kid. Jurassic Park is the movie my generation just loved. A film that had a leading female scientist as well as a young teenage female computer whiz. That film encouraged young girls like me in the sciences.

The new Jurassic World has no female scientist and the only featured scientist is portrayed as an evil, greedy loon. After my extensive years of enjoying science fiction, I know that good science fiction can encourage kids into exploring science. This film did not follow in the steps of its predecessor. It seemed to discourage scientific discovery and promote destruction.

I don’t mind destruction in my movies. I love it, in fact. Still, science fiction used to have the rare talent of showing the wonders of learning without kids realizing it. Educating them in a fun and unassuming way. Now, we just threw it out the window for a bigger killer with more teeth.

Now, going back to that tidbit about Toy Fair. There were some science toys but mostly destructive action figures. Let’s keep hoping those kids pick up the science toy first.