John Ostrander’s Story Behind the Story 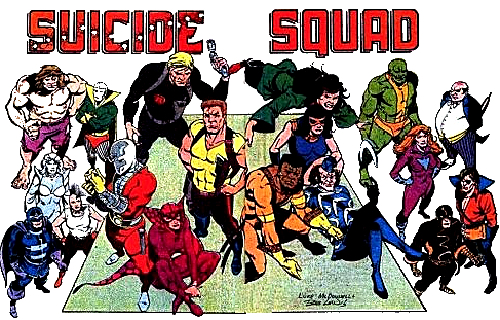 There’s a lot of attention focused on the Suicide Squad, what with the movie being filmed right now and coming out next year, and, yes, it’s based on the version of the Squad that I created back in the 80s and, yes, I should see some money for the use of Amanda Waller (not the Squad per se since it already existed in another form in the DCU) and that’s all pretty cool. Might as well tell my version of how this all started and give some credit where credit is due. You may have heard/read some of this before but I’m at the age where repeating stories is de rigeur so let’s do this.

My first shout out goes to Robert (“Bobby”) Greenberger who was our first editor on the Squad. I had met Bob at several conventions and while waiting in airports afterwards for our respective planes. I was working only for First Comics at that point; I hadn’t yet moved up to the major publishers. Bob and I got along really well and he broached the idea of my doing some work for DC. I was perfectly amenable and we started talking what I might do.

I loved the title “Challengers of the Unknown” which was lying fallow at the time. I considered, then and now, that this was one of the great titles in comics. All by itself, it conjured up possibilities. Really cool.

Unfortunately, someone else had already grabbed it for development so it was off the table. Then Bob suggested “How about Suicide Squad? It only appeared for five issues of Showcase a million years ago and nothing is being done with it.”

My first reaction? What a stupid name! Who in their right minds would belong to a group that called itself Suicide Squad? And just as I was dismissing the whole thing, an answer struck me: the only ones who would join would be those who had no other choice. Who doesn’t have any other choice? Folks in prison. Supervillains who’ve been caught. How do they get out of prison so fast? The Squad.

I thought about the Dirty Dozen and Mission: Impossible and The Secret Society of Supervillains, a DC title that teamed up loads of supervillains. I loved that. So the idea was to have a team of supervillains, rogues, enrolled by the government to take on secret missions deemed in the U.S. national interests. If caught they could be disavowed easily; they’re bad guys running around doing what bad guys do. If they die, who cares? They were bad guys. If they succeeded and got back alive, they would have time shaved off their sentences or outright freed.

It would also give us a chance to see the villains as competent and even deadly in their own right. Make them dangerous. For the missions, I’d comb newspaper and magazines for real world ideas. In fact, our first issue had a super-powered terrorist group attacking an airport while Air Force One was landing. I doubt I could get away with that today.

Bob suggested we also have some superheroes in it as well; not A list or maybe even B list. I was resistant at first; I wanted it to be all bad guys. Bob was insistent and it turned out he was right.

I wanted B-listers because I wanted to be free to kill any of them off. I wanted the missions to be dangerous; in all other comics, you knew the heroes were coming back alive because they had to be there for the next issue. Not with the Squad. We could kill them off with impunity. And we did. Always added to the suspense of the story – you never knew who was coming back alive.

To run the group I created Amanda Waller, a.k.a. The Wall. Tough as nails, heavy set, middle aged, bad attitude, African American woman. Why? Because there had never been anyone like her in comics before (and there hasn’t been since). Actually, she was based on my paternal grandmother who scared the bejabbers out of me when I was a kid. One glare and that was it; whatever I was doing, I stopped, even if I wasn’t really doing anything.

Bob also brought in Luke McDonnell as our artist; Luke had just finished some Justice League and was looking for another gig. Luke had (and has) great storytelling and real good character skills. Not flashy but that suited the stories we were telling. Bob also added Karl Kesel as our initial inker. Karl was a hoot; he was brimming with ideas and I’d get what I would call “Kesel Epistles” where he would share his notions. I used some but always encouraged the participation; I figured that was the best way to make a good team. Let everyone have a say if they wanted it.

We picked our members and I wanted the ones that no one else wanted. Deadshot had a cool name, a really stupid costume when he first appeared that Marshall Rogers later revamped and made really cool, and only a few background facts. He was technically a Batman villain but the Bat office said they didn’t want him so I was free to give him a backstory and a bit more of a character.

Captain Boomerang was a Flash character but the Flash had also just been revamped as a result of Crisis on Infinite Earths and, at that point, the Flash office was no longer using the rogues. Bob suggested we use him and, at first, my reaction was, “What a stupid character.” (I really needed to learn not to do that.) However, I decided to make him like the character Flashman in the Flashman series of historical novels by George McDonald Fraser. Boomerang was an asshole but he knew what he was and liked it. Every time you thought he could sink no lower, he’d find a new level. He quickly became one of my favorites.

Bob also got us an issue of Secret Origins for the same month as our first issue so we could use background material; and reference the original Squad(s).

This is when Mike Gold stepped in, Mike is an old old old friend, my former editor at First Comics, and the one who gave me my first shot as a comic book writer. (Yes, it’s all his fault – unless you like my stuff in which case it’s all due to me.) He had gone over to DC and was intent on taking some others with him, including me. Mike got me a shot at plotting the first company wide crossover since Crisis, which we called Legends. Mike felt it would be a good idea to include the Squad in it for their first appearance since lots of attention would be drawn to the series. Among other things, John Byrne would be drawing it – his first work at DC after leaving Marvel.

Of course, I wasn’t sure. (Notice a pattern here?) I didn’t want the Squad getting lost in the shuffle. They weren’t, and we had a great launch.

At some point into the Squad’s run I brought in my wife, Kim Yale, as co-writer. Kim was a very good writer in her own right and she complimented and completed my work with the Squad. To say it wouldn’t have been the same book without her seems obvious and trite but it is also true.

Bob eventually moved on to other work at DC and new editors took his spot although none could take his place. His love of the Squad and his enthusiasm for it shaped the book from the beginning and it would not have existed without him, or Mike, or Luke, or Karl, or Kim. Did it change comics? Beats me but we told some damn good stories and now they’re making a movie out of it.

Not bad for a series with such a damn stupid title.