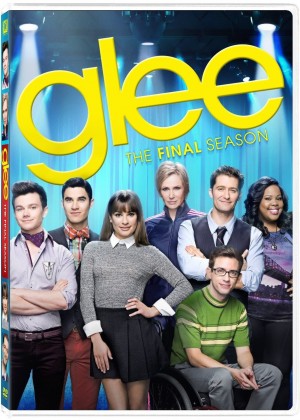 Glee lost me when it veered further and further away from its core concepts and refused to take its eyes off their initial stars and their forays into a magical version of New York City. I avoided the final season and from the recaps, it appears to have gone into gonzo land with little effort to ground the show in any sense of reality. As a result, I knew I wasn’t the one to fairly review the final season so I turned to a true Gleek, one of my Creative Writing students, and here’s what she had to say.

Glee has many meanings and definitions that the thought of losing the series or saying goodbye is almost impossible. But all good things must come to an end and knowing Glee, it will end in a big musical number that we will remember.

The sixth, truncated and final season of the series is out now in a box set courtesy of 20th Century Home Entertainment. It opens with Rachel Berry (Lea Michele) learning that she is being fired from her TV show, causing her to return home to Lima, Ohio. Kurt (Chris Colfer) also returns newly single and together the two friends prepare to start a new glee club at McKinley High.

Despite there only being thirteen episodes, Brad Falchuck and the writing staff managed to fit in a wedding between not one couple but two as the expected lovebirds Kurt and Blaine (Darren Criss) finally tie the knot and in somewhat of a surprise, so do Santana (Naya Rivera) and Brittany (Heather Morris). Fans from the Brittana and Klaine fandoms were happy and tearful that their favorite homosexual couples were walking down the aisle to their loves in the view of their friends and family.

That it was two gay couples getting married speaks to the series’ overall strength and value. Of all prime time television, it was the one to consistently and bravely explore what it means to be a homosexual teen, coming out to friends and/or family, and enduring the same travails as their heterosexual friends experience.

Like every other season, the characters learn a lesson that better prepares them to become their adult selves. Rachel learns to conquer her fear, Kurt learns that love is worth fighting for, Santana learns to follow her own choices and even their adult guru, Mr. Schue (Matthew Morrison) learns that you can do things by the bend of a bow and the power of an arrow.

The music, as always, is enjoyable, the stroylines, over the top as they were this season, easy to follow and the best effort was “Dreams Come True”. Here, Rachel earns a Tony and says, “Being a part of something special does not make you special. It’s special because you are a part of it.” Hearing those words just brings tears to my eyes, but what brings warmth to my heart is when nearly the entire series cast appear on stage to christen the school stage as the Finn Hudson Auditorium in 2025 and then sing One Republic’s “I Lived”.

Glee may be over as a television series, but not as a fandom and family. We learn that we are different but all the same thing. Heart. We are the new New Directions each with a special song to sing. With every broken bone, we lived and Glee changed our lives through characters who were going through the same things we were.

Goodbye, Glee. You will be missed but your lessons will be shared for generations.

The four disc standard DVD-only set comes complete with the usual assortment of extras, the Juke box, and some farewell notes. Best are the final features on disc four: Glee: The Final Curtin and Looking Back Video Yearbook.