Everyone is talking about whatever contact they may have had with David Letterman this week, and I’m no different.

I’ve mentioned before that I believe some of the reasons I ended up working at DC Comics almost 27 years ago was because I could pitch softball better than what most people there and that the guy I was interviewing with was the head of the company softball team, and that I went to the game that was scheduled to be against the crew from Late Night With David Letterman.

What I’ve never mentioned before now is that somebody in the DC production department had devised their own strategy to psych out the other team, and had written the entire thing out on big pieces of cardboard, like cue cards.

When the game was forfeited, the giant cards were left behind on the field— and I, being a true comic collector of one of a kind stuff, grabbed them. And kept them. Through five or more moves, I kept them.

And now, on the occasion of the end of David Letterman’s run in late night television, I bring you this never before seen list…

10. Our artists can draw perspective without a Monkey-cam.

9. Our X-ray vision reveals the condition of your underwear—and if we lose, we’ll tell.

8. Our top acts are Superman™ and Batman™, not “Stupid Pet Tricks” and “Curious Dave”.

7. Our writers have been working for the past 22 weeks.

6. If we lose, Superman will turn back time so we win anyway.

5. We use our Bat-ropes to trip baserunners.

4. We’re playing in our secret identites.

3. We have Clark Kent, you have Chris Elliott.

2. Superman may be a strange visitor from another planet, but Dave is from Indiana.

…and the number one reason DC will beat “Late Night”:

1. Good pitching, good defense, and powers and abilities beyond those of normal softball teams. 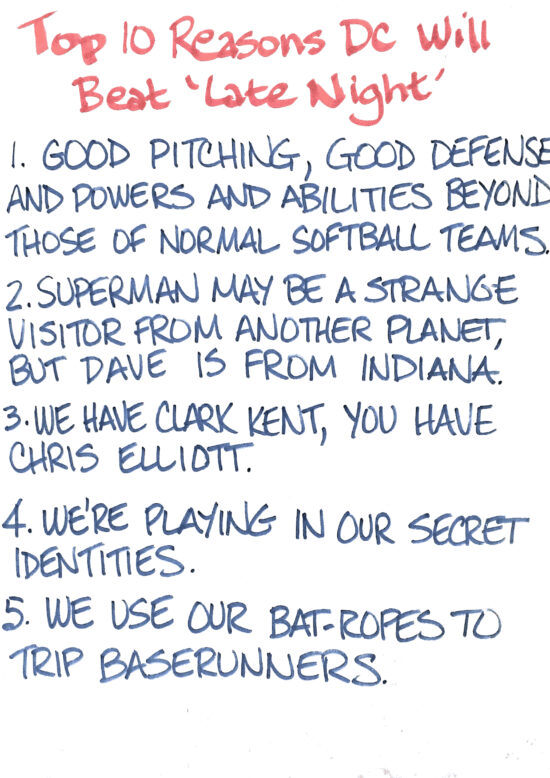 Hail and farewell to David Letterman, who hosted the Avengers before they became a billion dollar franchise.

And if you know who contributed to this list, let me know, huh?