Quick lesson on how to change a new video game from “mild interest” to “Why isn’t this in my hands already” … add Doctor Who! 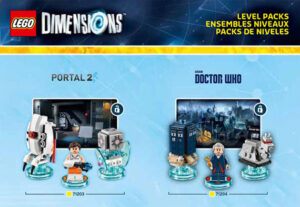 Lego Dimensions, the new entry in the interactive collectible mash-up videogame category has just fired a shot across the bow of amiibo, Skylanders and Disney INfinity by adding a timelord to its ranks of playable (and purchasable) characters.

While the game had already announced inclusion of its most popular licensed lines like Batman, Jurassic World and The Simpsons, it was quite a surprise when they announced the inclusion of properties they’d only licensed for their limited run Lego Ideas line.

Lego Ideas allows people to design their own suggestions for building kits, which Lego reviews and approves once they achieve the required 10,000 upviotes from the user community.  Sets for Back to the Future, Portal 2 and Doctor Who have already been approved, with the Doctor Who set not even released yet.

One must assume these license contracts included the ability to add the characters into videogames in future, because included they are. In addition to figures from their Lord of the Rings, and Scooby Doo  lines, as well as their in-house properties Chima and Ninjago, Lego release photos of figure sets for the Ideas-only properties.

The Lego series of video games are already staggeringly popular, with titles based on worlds like Indiana Jones, Pirates of the Carribean, and Harry Potter.  Dimensions will allow players to do what kids have been doing for years – play with them all together.  More details are popping up every day, but the sheer number of character lines they’ve negotiated to appear dwarfs any other.  Disney Infinitiy’s recent announcement of the Star Wars line being included has got some serious competition.

Lego Dimensions will be released on September 27, 2015.