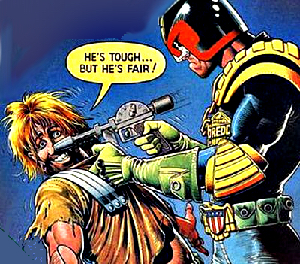 This past weekend was a big, major one with Avengers: Age of Ultron premiering, and, on Saturday, Free Comic Book Day. And geeks, in general, had a good, busy weekend. Events were popping up all around the country, celebrating geekdom.

It was also a huge money maker for geek companies. Marvel/Disney (as expected) scored big at movie box offices all over the US. Comic book stores opened their doors to new and old comic readers with free gifts as well as deals on their current stock. People were out and about spending money, which is good for the local community as well as big business.

All this spending of the almighty dollar.

Which made it all the more better when I opened up the FCBD 2000 AD issue and read the Judge Dredd story. This UK weekly had a futuristic story about certain people being banned from using certain building entrances set aside for the elite. Which is the exact same issue happening in NYC right now.

Science-fiction always has been used to highlight inequality and social issues throughout time, which is part of the reason I love it so much. Using entertaining media to educate people and share ideas is one of the best ideas humans ever had.

Still, I didn’t expect it to show up on FCBD. This is a day normally reserved to bring in new readers and give them a taste to whet their appetite. So taking a moral or ethical stance that could offend could be a risk. However, 2000 AD took a chance and I’m loving it. They show their platform through Judge Dredd, as well as other stories, and it’s an open-minded one. They are showing any and all readers who they are and what they stand for. This is what Sci-Fi is meant to be.

High-five to 2000 AD for using issues and dilemmas from “over the pond” to educate as well as entertain.