Bob Ingersoll: The Law Is A Ass #353: WAYNE ENTERPRISES NEEDS TO BATMAN DOWN ITS HATCHES

Early in his history he wasn’t, because early in his career, Batman built the Batmobile. 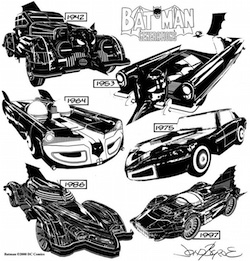 Himself. Okay, Alfred and Robin helped. But Batman designed the car. He assembled it. He supplied the equipment. He installed the options. Batrays and Batchutes don’t exactly come factory-installed. He even knew what wheels to grease in order to get the thing declared street legal. (I mean wheels on the car, silly. I’m not suggesting that Batman would ever stoop to something as crass as bribery.)

Same was true of the Batcave,

the Batplane, the Batboat, the Batcycle, the Batcomputer, the Batcopter, the Batshield, the Batarang, and for those barbecues in the Batyard, the Batula. (Bruce was so fixed on his leitmotif, I don’t understand how Robin never got an inferiority complex from living with all the eponymous accoutrement day in and day out.) And, while we’re at it, Bruce also made the strange costumes of Batman, the amazing inventions of Batman, the Bat-signal, and everything else we marveled at in Batman Annual v1 #1. All those 1001 secrets of Batman and Robin? Batman built them all. All by his lonesome.

Then in the late 70s, something changed. Batman got retconned so that he wasn’t just the rich son of a rich doctor. Starting with Batman v1 #307, Bruce Wayne was the head of Wayne Enterprises. He was a captain of industry. The latest scion of a long-standing family of incredibly rich industrialists that dated back to the 19th Century when Judge Solomon Wayne started up WayneCorp and used the money he earned to found Gotham City. Over the ensuing decades – through Alan Wayne, Kenneth Wayne, Patrick Wayne, Thomas Wayne, and up to Bruce Wayne – the family fortune never waned.

When Batman’s history was retconned to include Wayne Enterprises, Batman didn’t have to build anything on his own anymore. He had a huge, multi-national conglomerate piggy bank he could raid whenever he wanted to. And he did want to. Frequently. Batman no longer needed to develop or build his equipment anymore. Wayne Technologies did it for him.

Problem was, Wayne Technologies didn’t know it was designing and building all those wonderful toys for Batman. After all, Bruce Wayne couldn’t exactly go to Wayne Technologies and say, “Hey can you build me a new car with armor plating, puncture resistant tires, a mobile crime lab. Oh yeah, and scalloped batwings for fenders?” Not without someone getting suspicious.

So Bruce started appropriating the discarded prototypes built for projects that fell through or that Wayne Technologies abandoned. Rather than have those prototypes gathering dust and cluttering up more garage space than Jay Leno’s http://www.nbc.com/jay-lenos-garage car collection; Bruce took them, retrofitted them, and adapted them to be used as Bat-whatevers.

The most prominent example of this was in the movie Batman Begins, where Bruce Wayne took the abandoned prototype for an army vehicle called the Tumbler and turned it into the Batmobile. He also used the prototype nomex armor developed by Wayne Enterprises for another abandoned project to build his bat costume. But it wasn’t just the movies, the Bruce Wayne of the comic books did the same thing, too.

And at that point, Batman was a thief. Every time Batman did this, he was embezzling.

Wayne Enterprises may have been a closely-held corporation with very few shareholders. And Bruce was probably the biggest shareholder. He may even have held 99.99 % of Wayne Enterprises. But the other shareholders still owned a fractional part of the company, including a fractional part of all the equipment Bruce appropriated for his own personal bat-use. Didn’t matter if the only purpose the property served was to sit around in warehouse gathering storage fees, the fractional owners had the right not to have that fraction taken.

As one of my law school professors used to say, “He who takes what isn’t hissen, must make good or go to prison.”

And when you’re the CEO of a large multi-national conglomerate who takes corporate property for your own personal use, you’re embezzling from the company and stealing from the shareholders. You’re also breaching your fiduciary duty to the shareholders, but that’s another topic for another day.

So first Batman wasn’t a thief. Then he was. Then, recently, he wasn’t again. But why he wasn’t again is part of that fiduciary duty discussion that’s another topic for another day.

Wow, Batman and a cliff-hanger. Guess I should close with, “Tune in next week! Same Bat-Time! Same Bat-Channel!”