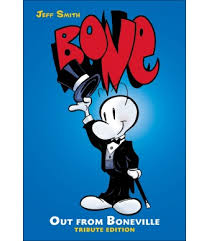 Bone is a phenomenon that just keeps growing, it seems.  Jeff Smith’s self-published debuted in 1991 and charmed readers who discovered the black and white fantasy. However, he found a brand new audience when Scholastic added the series, in color for the first time, to their Graphix imprint. There now are the nine volumes, Rose (with art by Charles Vess), Tall Tales, Bone Handbook and three illustrated prose novels from Tom Sniegoski.

To celebrate the tenth anniversary of this incredibly successful partnership, Scholastic is releasing next week a hardcover Tribute Edition of volume one. The complete, still-charming is on hand but there is also additional material. We start with the 10-page poem “An Ode to Quiche”, written by and critiqued by the monsters who plague the fellow from Boneville. There are nine pinups culled from the other volumes so it’s nice to see plenty of Smith’s lovely cartoon work.

Graphic novels have grown a lot since they became a thing back in the 1970s and it’s terrific there is a robust market now for children to discover graphic storytelling. The versatility and promise of the medium is more often found here than in the stand comic books no longer being produced for these readers. It’s nice to see Scholastic celebrate with Bone.