Opening Batman: The Complete Series, I said, “This is my childhood in a box.” When the ABC series debuted in January 1966, I was seven, the exact perfect age to be utterly captivated by seeing a comic book faithfully adapted to the small screen. Without fail, I was glued to the television set on Wednesday and Thursday evenings right until the final episode aired in March 1968, leaving indelible images in my mind. These were reinforced just a few years later when local syndicated reruns burned the stories, sounds, and characters deeper into my psyche.

I was too young to understand the context of the show and its impact on popular culture, DC Comics, or the world of licensing. I didn’t get the wry jokes, it’s knowing pop camp approach to storytelling, or how it cleverly worked on multiple levels (a rare occurrence on prime time back then). Instead, I just knew that it was the Dynamic Duo getting into amazing fights, escaping inventive death traps, and keeping Gotham City safe.

As the show continued to be rerun, I grew up and came to appreciate the challenges confronting William Dozier, hired by 20th Century Fox to adapt the character. He wanted Dick Tracy or Superman, but those rights weren’t available. 20th settled for Batman in 1964, just as the character was being reinvented by editor Julius Schwartz, saving the Gotham Guardian from possible cancellation after a decade of benign neglect. It was also a time of convergence as a new wave of influences was seeping throughout American culture. The Beatles had stormed America. Roy Lichtenstein and Andy Warhol were rewriting the rules of modern art. Fashion designers were shortening skirts and introducing brighter colors. American households were buying more and more color televisions so by that fateful January nearly all of prime time programming was being broadcast in color, in some cases highly saturated color.

Batman was also the beneficiary of good scheduling. ABC had several shows perform poorly that fall so conceived the marketing concept of a Second Season launching right after the holidays. As a result, it received tremendous marketing and a hungry audience awaited that first fateful episode.

Lorenzo Semple Jr. worked with Dozier to set the tone that would be slyly wink at the parents, offer sexy molls to the teens, and pure action for the main viewers: the kids like me. His two-parter was almost perfect with Frank Gorshin’s manic Riddler, Neil Hamilton’s stoic Commissioner Gordon, Jill St. John as the distracting femme, and of course, Adam West and Burt Ward as our dashing heroes. The camera angles, jazzy soundtrack, and brilliant colors all came together and ignited Batmania.

The 120 episodes comprising the three seasons are incredibly uneven in their quality, especially the full second season which seemed to exhaust all concerned. There is lazy acting, very bad writing, and increasingly implausible storylines and death traps as the camp overshadowed the other aspects that made the initial season so memorable. Also, as the second season rolled onward, rather than continue to mine the comic books for villains plot lines, the writing staff seemed encouraged to find roles to fit available actors or try and match two decades of inventiveness from DC’s stable of writers, led by Bill Finger, Batman’s co-creator. It’s a shame Finger only got to write one two-parter given how much of his DNA can be found throughout the show, from the origin story (mentioned rarely) to the oversized props.

But when the series was good it was very, very good and rewatching them as an adult, some even got better. The performances from the core villains, starting with Gorshin but including Burgess Meredith (Penguin), Cesar Romero (Joker), Victor Buono (King Tut, the only original creation that worked) and Julie Newmar (Catwoman) showcase some genuinely fine performances and its clear all are enjoying their work. Newmar’s Catwoman was slinky to the 7-year-old and downright sexy and alluring to his adult self. They get to chew the scenery with gusto but credit also has to be given to silent film star Hamilton and Alan Napier (Alfred) who worked hard to ground their characters, so the absurdities were heightened.

By season three, ABC saw the craze was dying out and cut the show from two nights to one, cramming a lot of story into thirty minutes while also introducing Yvonne Craig as Batgirl, a logical way to extend the franchise. Her cute face and balletic moves endeared her to males of every age while girls finally had their own positive role models. But even she was not enough to save an oversaturated public and like a brightly burning candle at the end of its wick, the light went out.

As has been made clear through the years, there were numerous reasons why the series remained unavailable before this week. The best coverage appears to be at Wired but one good thing has come from the delay: technology has advanced to a degree where the digital restoration work is the highlight. The colors are more vibrant, the detail to the costumes and props is riveting, and the care means we’re getting the best possible version of these now cherished episodes.

The series comes in a variety of packages and price points but reviewers were sent the Limited Edition box set which has all the bells and whistles you could want, starting with the sound chip in the packaging letting you hear the Neil Hefti theme. There’s the Hot Wheels diecast metal Batmobile, complete with Batcave background panel and a sampling of 44 of Norm Saunder’s fine artwork from the Topps Batman trading cards from that era. Within the colorful box is a small book with photos from Adam West’s collection, which is a nice assortment of familiar and new images. 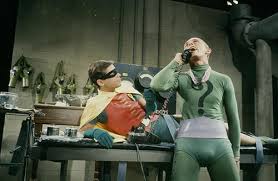 There are twelve discs in the box, the final one being nothing but special features. If there
is any fault in the collection it is that many strong opportunities were missed in favor of some overly simplified, gimme pieces. The Bat-gadgets and villain props should have received recognition and in some ways George Barris’ groundbreaking work on the Batmobile is underplayed while no real mention is made of the Batboat, Batcopter, or Batgirl’s frilly cycle. Craig herself is oddly missing from all the interviews, which is a shame since she is one of the few remaining performers still left. None of the secondary players even get a chance to discuss what it has meant to be on the show. Finally, a piece about the comic book’s influences on the show, including which issues provided inspiration, would be in order but the comic is often left out of the discussions at all.

Which is not to underplay the value of the extras we do get. We start with the West-centric Hanging with Batman (29:56), a career retrospective that shows what the struggling actor’s career was like before receiving this part. Perhaps not enough is done about the dry spells of the 1970s and 1980s before his career renaissance at the hands of my generation who were now in a position to hire him.

Holy Memorabilia Batman! (29:59) heavily spotlights collector and radio personality Ralph Garman and Guinness record holder Kevin Silva as both show off their vast collections. West even visits Garman’s home and tries on a replica cowl, having fun at the same time even he seems awed by how much stuff was generated in so short a period of time. Fiberglass replica master Mark Racop is the only one to give the cool car and Barris their due.

Batman Born! Building the World of Batman (29:41) is the one piece that takes a serious, academic approach to putting the show’s phenomenal success into perspective. Of course, much of that comes from former DC president Paul Levitz, who can reliably be counted on for such things along with the ubiquitous Michael Uslan, West, Ward, Newmar, animation director Bruce Timm and even comics historian Andy Mangles helps flesh things out. This should have been the disc’s centerpiece and needed far more time to properly explore the subject.

On the other hand, Bats of the Round Table (45:08) sees West host a conversation with director Kevin Smith, Garman, actor Phil Morris, and DC Comics’ copublisher Jim Lee. Why on Earth is Morris there? There needed to be people with more gravitas to make the conversation more useful and less gushing. (And someone should have been there to correct all the misstatements of fact.) If you skip any feature, this is the one.

West recorded audio commentary for the episodes some time back and it would have been nice to have them here. Instead, we get the interesting Inventing Batman in the Words of Adam West, as he sits with his pilot script and walks us through how he developed his performance, showing off his original handwritten notes. As result, we can rewatch “Hi Diddle Riddle” and “Smack in the Middle” and see an actor working on his craft but you’re dying to hear him riff about working with Gorshin or St. John, et. al.

Na Na Na Batman! (12:15) is a filler feature where the camera crew wandered the Warner Bros soundstages and interviewed cast and crew from their other series about Batman. Some of it cute but given what’s missing, this stands out as a very cheap marketing ploy.

Finally, we have Bat Rarities! Straight from the Vault, nicely cleaned up versions of things we’ve seen before but want now.  We have the mini-Batgirl TV pilot (7:54); Adam West and Burton Gervis’ screen test (including solo Gervis moments proving he, now named Burt Ward, deserved the role (6:16); a screen test featuring Lyle Waggoner and Peter Deyell, making it clear why Deyell did not get the role while Waggoner would have been interesting (4:23); and an archival clip of James Blakeley, the series’ Post-production Supervisor, which is interesting since he was the one to develop the way of splicing in Joe Letterese’s onomatopoeia text during fights (2:24).

Summing it up: given how long fans of all ages have been waiting for this released, Warner Home Entertainment does not disappoint. For those curious about the frenzy, these are the versions you want to sample in their clean, crisp, uncut glory.