Gregory Maguire had no idea what he was unleashing when he wrote Wicked: The Life and Times of the Wicked Witch of the West in 1995. Since then, a tremendous amount of energy has been spent on revisiting the antagonists from fairy tales to modern fiction in an effort to explain their motivations. Quite often, the opponent is more interesting than the protagonist so there’s an appetite to understanding what made them “evil”.

Another trend has been taking the classic fairy tales and first making them into palatable Disney animated fare followed by live-action adaptations and stage editions. By combining the above, we arrive this year with Maleficent. Perhaps the single most arresting visual in the Disney rogues gallery, this cunning sorcerer has given generations nightmares since the cartoon version arrived in 1959.

With Angelina Jolie as the title character, this had the making of a fascinating character story hidden under layers of action, adventure, and humor as she cursed young Aurora who went on to become known as Sleeping Beauty.  The pedigree both before and behind the camera promised a grand experience which is why the final product, out Tuesday as a DVD Combo Pack, is so disappointing.

Linda Woolverton, who has virtually lived writing fairy tales for Disney since Beauty and the Beast in 1991, seemed a perfect choice for the project. She dutifully did her homework and found a key to understand why Maleficent was evil. In the Charles Perrault and Brothers Grimm retelling of the story, she was a fairy and fairies, after all, have wings. Once she asked, “where are Maleficent’s wings?” that he story was found. 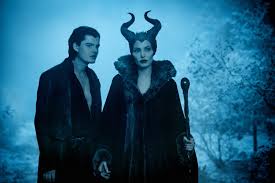 The film tells of young Maleficent (Ella Purnell and Isobelle Molloy), an orphan fairy, who is somehow the leader of the mystic realm known only as the Moors. When an orphan human, Stefan (Michael Higgins, later Sharlto Copley), wanders from his adjoining lands, an unlikely friendship develops. But then he vanishes and the next time we see him he is a servant to King Henry (Kenneth Cranham) and we’re told, but never shown, he had become greedy. Instead, Henry leads a vast army towards the Moors where he is repelled by Maleficent and her enchanted allies where he is mortally wounded.

Stefan renews his acquaintance with Maleficent in order to kill her and become heir to the throne. When he drugs her, after forgiving him his absence, he finds he cannot end her life but instead steals her wings, effectively ruining her and winning him the throne. Now she’s pissed and seethes and rages and summons heretofore unseen occult energies and becomes the recognizable evil power.

Woolverton is so busy building up Maleficent and making her sympathetic that she’s forgotten to make the humans anything more than one-dimensional beings. Why does Henry want to conquer the Moors? There is no apparent enmity between them nor reason to gain the land? Why is Stefan so ambitious, forgetting his friendship? Everything the humans robs the film of being a well-rounded story.

Similarly, the three fairies who arrive to first bless then care for Stefan’s daughter Aurora (Vivienne Jolie-Pitt, Eleanor Worthington Cox and finally Elle Fanning) are played for comedic effect but fail at being funny, just inept, wasting the talents of Imelda Staunton (Knotgrass), Juno Temple (Thistlewit), and Lesley Manville (Flittle). The crow Diaval (Sam Riley) is enchanted by the witch and is at least interesting to watch. Memorable supporting players would have made this a far stronger film.

The most interesting development Woolverton and director Robert Stromberg bring to the story is the quasi-mother/daughter relationship between Maleficent and Aurora, who is gifted with such a kind soul that she mistakes Maleficent not as the bane of her existence but as her fairy godmother. This leads a fine twist in the retelling of this classic tale.

The effects are swell, the dragon transformation and climax strong but the underlying motivations are so weak that it really robs the film of the strength of its themes. As a result, this 97 minute story disappoints more than it thrills. Clearly, though, I am in the majority since its worldwide box office is over $750 million.

The film comes as a Blu-ray, DVD, Digital HD combo pack and the high definition transfer is rich and wonderful to watch. The 7.1 DTS-HD Master Audio is a fine companion so young girls everywhere should enjoy it time and again.

For the adults, there are some nice Bonus Features, notably the five Deleted Scenes, at least two of which address the issues I raise above. Aurora: Becoming a Beauty is a lightweight look at how much Elle Fanning enjoyed becoming a princess. From Fairy Tale to Feature Film features Woolverton talking about the process without anywhere near enough time tracing the source material. Building an Epic Battle looks at the cinemagic involved in this particular action sequence while Maleficent Revealed looks at the rest of the digital effects but does so without much in the way of explanation o you just stare at before and after images as they speed by. Classic Couture examines the fine apparel worn by the characters (and probably deserves an Oscar nomination).