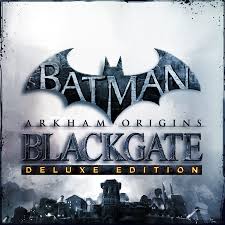 It’s become a growing practice to create a special edition of popular new releases specifically for Sony and Nintendo’s handhelds, more suited to the system’s differing strengths.  When [[[Batman: Arkham Origins]]] was released recently, both systems got their own side adventure, obliquely connected to the main game, but unique in features and content. Thanks to the popularity of the series, the handheld game has been expanded and made available for all major systems, console and handheld.

Batman: Arkham Origins Blackgate Deluxe Edition is set three months after the events of Arkham Origins.  An explosion at Blackgate prison results in a chaotic takeover of the facility, headed by The Penguin and Black Mask.  Things get more serious when it’s learned that the Joker has also joined the incarcerated internecine warfare. The game has some limited free play options – you can battle the three bosses and their associated campaigns in any order, and the end game finale differs based on who you chose to fight last. The movement is largely a 2-D left-to-right progression, with jumps to other angles for certain puzzles and  boss fights.

The gameplay is similar enough to the main line of games that it’s easy enough to pick up with little trouble.  Enhanced to HD-quality, the game is still based on a design for smaller, slightly less powerful handheld devices, so it’s  not as huge and expansive as the primary title.  The Deluxe Edition upgrade adds new characters, levels and unlockables – there’s 10 special costumes to seek out, from DC stories like Zero year, the Batman 66 costume, and the Blackest Night costume which makes you impervious to damage.

The game is fun and entertaining in their own right, good for filling the time between DLC releases of the main games.  Likely not worth a repurchase if you got the original for the handhelds, but at this price, it’s a good addition to the series, and certainly easier to see on a bigger screen.

Batman: Arkham Origins Blackgate Deluxe Edition is available via download for most console and handheld systems now, including Steam, and coming soon on the WiiU .