Divergent is a rather cynical reminder that Hollywood is all about making money and never taking any chances.  Twilight blows up and everyone scours for Young Adult books with supernatural elements and love triangles.  That search eventually leads to The Hunger Games which makes a ton of money leading to another wave of searches for YA books about dystopian futures and that is how we got to Divergent.  If this movie makes enough money expect a round of films where everyone refers to groups of people with needless SAT words.  I think that’s the takeaway here.

In the Divergent world all life exists in a post-apocalyptic Chicago where everyone exists in one of five factions Abnegation, Amity, Candor, Erudite, or Dauntless.  Everyone is tested for their appropriate faction but that is rendered moot as you are allowed to pick your faction when you reach some late teen age that somehow makes it so our main character Beatrice chooses on the same day as her older brother. Beatrice is a Divergent, someone who tests equally well for more than one faction.  This makes her dangerous somehow.  People will try and kill her if they discover this information.

This might seem like a lot of basic exposition and the film struggles mightily with it.  Establishing the previous paragraph and showing Beatrice (later just Tris) training for acceptance into the Dauntless faction takes the overwhelming majority of the film.  The actual story with real consequences and stakes doesn’t start until awfully close to the two-hour mark of the film.  This is a trilogy and I understand the need to lay groundwork for future movies (especially when they come pre-greenlit) but it really feels like they sold this movie out for excessive exposition and one too many training montages.

I also strongly feel that good science fiction needs a clear philosophical bent and I’m just not sure what that is in Divergent.  It might be about accepting people who are different, it might be about the importance of family, or it could be as simple as condemning people who want to throw violent coups.  It could be that this will also be clearer as the series goes on but I knew after one film that The Hunger Games would be about rebelling against an oppressive government.  Divergent just leaves me confused and disinterested. 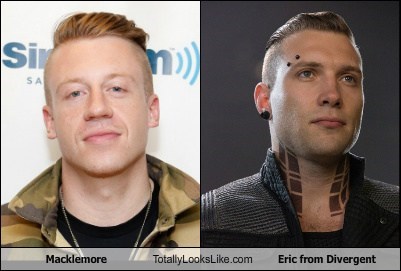 The bad guy for most of the middle third of the movie, Eric, looks so much like hip-hop artist Macklemore that it’s honestly distracting.  It’s a choice I can’t understand unless this movie is intended as a propaganda piece to turn the young girls of America against Macklemore.  I would fully support that agenda and would be prepared to change this entire review into a rave if that agenda came out.  If anyone at Summit Entertainment or Lionsgate would like to comment on these please send a note through official ComicMix channels.