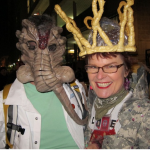 “It started when someone from Indiana was bartending at my place,” says Kirah Haubrich, recalling a fateful night before the 2011 Mardi Gras season. “We asked about his first Mardi Gras, and he says ‘I thought it was really weird, but I didn’t see a lot of cosplay.’ It’s because we all have costumes and no one thinks about that in particular. But if we had a scene, I said it’d be called Chewbacchus. Immediately, I turned to Ballard. And after the night I said Chewbacchus to him, three weeks later the Bar2 was being built.”

All it took was one seasonal play on words, and suddenly Haubrich and her friend Ryan Ballard became the unexpected founders of the Intergalactic Krewe of Chewbacchus, Mardi Gras’ only official Sci-Fi and Fantasy themed organization. Together with friend and fellow “overlord” Brett Powers (think of them as organizational leaders, but ones who can trade Close Encounters quotes), the trio first unveiled Chewbacchus to the world in 2011. With 400 members marching in that inaugural parade, clearly they had tapped into something.