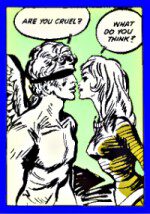 It just started to snow out here in the Atlantic Northeast. I got the mandatory robo-call from our mayor telling us the world is coming to its end. There’s just enough white stuff on the ground for a 1980s yuppie to slip into a twitchy nostalgic daze. Going outside would be stupid: people out here don’t know how to drive on snow, and they act as though a little bit of snow is a sign from their lord telling them they’re going to hell. Which, given the fact this is snow and not hot hail, seems oxymoronic.

I’d give up and just watch television, but I really haven’t enjoyed daytime television since Phil Donohue got liquored up and threated to bite Mike Douglas’s balls off, and besides, odds are in favor of my losing power for at least a while. The good news is, I’ve got lots of stuff on my iPad – including work – and I can recharge that in my car. The better news is, pretty soon we’ll all have access to a lot more fun stuff.

Perhaps you heard that Marvel Studios is cutting out a slice of the MCU and taking it to Netflix as a whole bunch of mini-serieses: Daredevil, Jessica Jones, Iron Fist and Luke Cage, each with its own 13 episode series, each set in Hell’s Kitchen, and then winding up with a big mini called “The Defenders.”

That’s pretty cool. I like the idea of programming coming from non-broadcast and non-cable sources, and I like both House of Cards and Alpha House on Netflix and Amazon Prime, respectively. Marvel says that Netflix gives them the ability to do more fan-friendly teevee; that’s either a really good idea or a threat. We’ll see.

Now comes word that another comics creation is coming to TabletVision. Amazon Studios is paying for the long-in-development Barbarella pilot, based upon Jean-Claude Forest classic science-fiction comic from the 1960s. Skyfall writers Neal Purvis and Robert Wade are still on board to write the series.

I don’t think any of these projects would have made it on cable teevee, and certainly not on broadcast. Oh, sure, maybe Daredevil, Jessica Jones, Iron Fist or Luke Cage, but not all four tying into a fifth mini-series. As for Barbarella, well, the campy movie doesn’t transfer well into the 21st Century, but the comic book does. We’ll see which path it takes… and how salacious they can be.

With the recent, massive improvement of Agents of SHIELD, Fox’s Gotham pilot (which sounds like it has great potential), NBC’s John Constantine pilot, and ABC’s Agent Carter pilot (I loved the Marvel One-Shot on the Iron Man 3 Blu-Ray), I’m actually a lot more enthusiastic about teevee comics than their four-color counterparts at Marvel and DC.

And they’re willing to put it all on my lap, or, through AppleTV or similar devices, on my HDTV.

For free… well, pretty much.