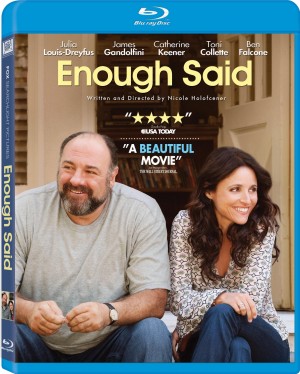 James Gandolfini, Julia Louis-Dreyfus and Catherine Keener shine in this heartwarming comedy that A.O. Scott of The New York Times calls “a small miracle of a movie.”

Divorced mom Eva (Louis-Dreyfus) may be falling for Albert (Gandolfini), a sweet, funny, like-minded divorcé. But as their relationship blossoms, Eva befriends Marianne (Keener), who’s always complaining about her ex-husband. When Eva realizes that Albert is the target of Marianne’s rants, she begins to question her own perceptions about first impressions and second chances.

The Blu-ray combo pack’s special features include exclusive second takes, promotional featurettes, and a look at the theatrical trailer for the film.

For your chance to win the Enough Said Blu-ray combo pack, answer the following question by 11:59 p.m., Wednesday, January 15. The decision of ComicMix;s judges will be final and the contest is open only to readers in the United States and Canada.

Julia Louis-Dreyfus is best known for playing the character ______ in the show Seinfeld.