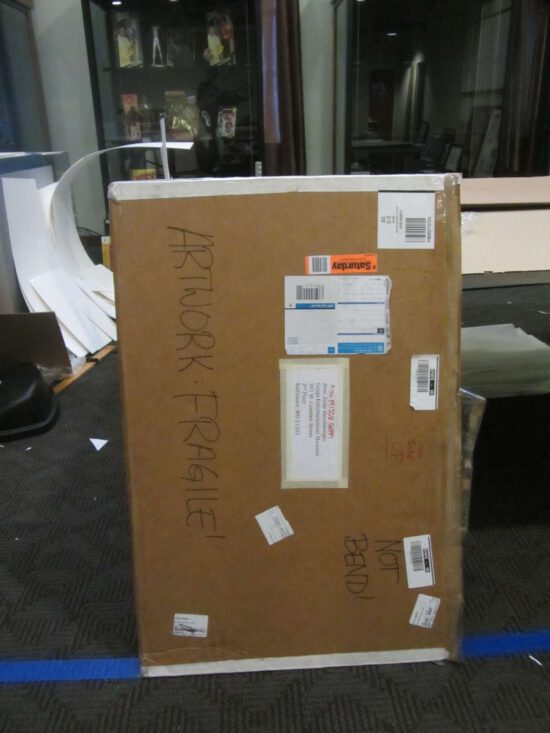 That’s what Brown can do for me.

“What can brown do for you?” Was the once massively successful slogan for United Parcel Service (UPS) that’s been replaced by “We Love Logistics.”

If you ask me both slogans suck.

“Who can Brown screw for you?” Now that’s truth in advertising.

Instead of writing about the fantastic opening of Milestones: African Americans In Comics Pop Culture & Beyond last Friday the 13th at The Geppi Entertainment Museum I’m writing about a devastating lost to superstar artist and my best friend Denys Cowan.

Thursday the 5th of December 2013 Denys Cowan and I sent, via UPS, our artwork for the Milestones show. The work was to be shipped for overnight delivery.  That was the plan but Brown screwed that up. When called the UPS location where the work was sent from gave the wrong cut off time for east coast overnight shipments. So the art was scheduled to arrive on Saturday instead of Friday the following day.

There was an omen if ever there was. It was two packages but one shipment. My assistant James was smart enough to request two different airbills to make any tracking easier.

Bad stormy weather on the east coast was headline news much of the week so the art was wrapped in plastic, sealed with tape, then placed in size related cardboard boxes and that was sealed with at least 3 layers of packing tape. Professional artists KNOW how to ship their art.

Denys sent 28 original pieces of not just art but history. Included were irreplaceable work from original Milestone concept drawings to Batman #400 pages other works from both before and after those career highlights.

My work (some of it) arrived at the Geppi on Saturday. Denys’ did not. On Monday UPS says it tried to deliver Denys’s package but the Geppi was closed because of a snowstorm.

On Tuesday Denys’ box arrived. In that box was some damn fine art. Problem was 27 pieces of Denys’ 28 pieces of art were NOT in the box.

For some reason that has yet to be explained to me Denys’ package sat for two days in the UPS Kentucky hub. BOTH boxes left and arrived at the UPS location in Kentucky at the same time. My box was scanned and arrived in Baltimore on Saturday.

I’ve placed numerous calls to UPS and have made it crystal clear what was missing was the art of the man whose idea it was and from which the Milestones show sprung. I made it extremely clear that if this was a show on cubism they had ‘lost’ Picasso’s art.

The woman I said that to didn’t get it. “The Jackson Five exhibit without Michael.”

I spoke to 11 different people during the week.  All were extremely nice; all were as useless as a condom worn on an ear.

What was made clear to me was the repeated UPS reason why 27 of 28 works of art were not in the box. The package was somehow sealed wrong and the art, ‘fell out.’

So, the packing tape (used by professional MOVERS among others to keep boxes SEALED-hence the name PACKING TAPE) somehow came loose, every layer simply came apart the plastic sealed art then fell out, the plastic opened 27 pieces of art with it but one somehow crawled back in the box and was able to make the trip from Kentucky to Baltimore.

When arriving at the Geppi the box was sealed (badly) when opened both the art and the plastic around it was gone, say ONE.

HOW can that be? How can 28 pieces of art wrapped in plastic become ONE piece of art?

The art was either stolen or ‘fell out.’  I’m sure it was stolen, someone opened the box, opened the plastic took the art except for one, resealed the box, badly and sent it along it’s merry way.

I can’t say that for a fact because I was not there when it went missing. I also can’t say for fact slavery is bad as I’ve never been a slave but I’m pretty sure it is.

As of today, Monday Dec. 16th nothing has been done to find the artwork of Denys Cowan.

The last thing I was told was NOTHING could be done to expedite the ‘process’ because UPS treats every single ‘lost’ package the same they are all of equal importance.

UPS is Johnny on the spot when someone shoves a TV camera in their faces.

Every package is the same my ass. You mean to tell me UPS would not move any faster if the Academy Awards were to be broadcasted on a Friday and the Oscars statures ‘fell out’ of a box Tuesday?

The artwork of Denys Cowan deserves a lot more respect than a ‘tablet’ and to that end UPS is about to get a lot more than a TV camera shoved in their faces.