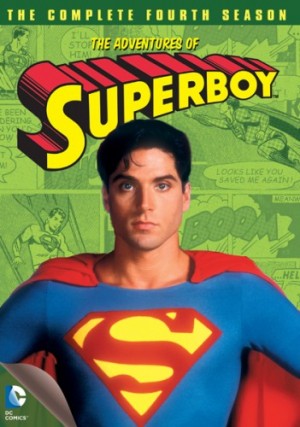 The Adventures of Superboy found its groove with the third season and a sense of stability was most welcome as the tone was consistent and the stories got stronger thanks to Stan Berkowitz and the increasing influence of DC editors Mike Carlin and Andy Helfer. Gerard Christopher as the title character had truly grown as a performer with time and Stacy Haiduk’s Lana Lang was every bit his match. As a result, things looked promising as production on the fourth season got underway in the summer of 1991.

However, the success of Batman in 1989 and that summer’s sequel, Batman Returns, meant there was fresh demand for super-heroes. DC Comics’ parent, Warner Bros., had already had limited success with The Flash on CBS and was looking to build. They needed Superman but that meant, in a bizarre twist, they filed suit against Alexander and Ilya Salkind to regain control of all elements stemming from the hero. ABC was interested in an adult Superman tale and didn’t want competition from a low-budget first-run syndicated series. So, as production continued, its death warrant was also being composed.

The final season is now available from Warner Archive and you can see what might have been had Lois & Clark not been on the drawing board. There are returning foes, longer stories with more two-parters than before and a sense that the boy was on the verge of becoming a man. Still assigned to the Bureau for Extra-Normal Matters, Clark and Lana are well positioned to stay atop of the bizarre happenings around the world – and beyond.

Berkowitz, accompanied by J.M. DeMatteis, write a hefty percentage of the season and are joined by Christopher himself, penning two episodes. One of them, “Cat and Mouse” gives Clark a promotion but nicely threatens his alter ego when he undergoes a psychiatric evaluation at the hands of perceptive guest star Erin Gray.

Bizarro (Barry Meyers)and Lex Luthor make repeated appearances this season, and Lex even partners with Metallo in “Threesome”, putting all of Smallville at risk. Bill Mumy’s Puck also appears twice in a nice turn but the most entertaining guest stars were found in “Paranoia” as Noel Neill and Jack Larson briefly return to the mythos. Carlin and Helfer wrote a few tales including one introducing the television incarnation of the Kryptonite Kid (David Carr). Fittingly, they also wrote the final two episodes, “Rites of Passage” that tie together several threads from the mythology and set the stage for an unrealized future.

Episodes 74-90 offer up some of the strongest material in this oft-forgotten series, and they’re worth a second look.