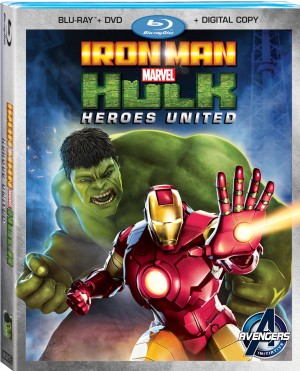 In case you missed it, Marvel’s Iron Man & Hulk: Heroes United was released last week and we’ve got one giveaway package of the Blu-ray Combo Pack along with an exclusive Iron Man MiniMate courtesy of our friends at Shout! Factory.

In order to win, tell us who would win a fight — Iron Man or the Hulk — and why. Your entries have to be received by 11:59 p.m., Saturday, December 14. Open only to readers in the United States and Canada. The judgment of ComicMix‘s judges will be final.

Marvel makes history again with one of the greatest Heroic team ups in the universe. Hulk’s brute strength and Tony Stark’s high-tech intellect come together to create a powerful duo necessary to face off against one of the most dangerous enemies.

When “Zzzax,” a seemingly invincible, energy devouring monster threatens to destroy the planet, these two Avengers are mankind’s only hope. Alone, neither can defeat the awesome power of Zzzax. As a team, they just might have a chance – if they can find a way to work together without smashing heads before time runs out!

Packed with explosive action, loaded with bonus features and presented in groundbreaking Marvel CG Animation, Iron Man & Hulk: Heroes United is a must-own movie event that will blow you away!

Marvel puts a humorous twist on their old-school original animated series. What better way to take a break from fighting villains than hitting pause and enjoying a little comedy with Marvel Mash-Ups.

Super Heroes are larger than life on their own. But when they join forces with another, they become a force to be reckoned with.  Marvel’s Chief Creative Officer, Joe Quesada, joins Ryan Penagos (Agent M) in an intimate and lively one-on-one conversation about these Marvel Team-Ups.