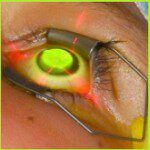 I’ve seen fandom do beautiful things. In point of fact, I can see because fandom (and some great friends) did a beautiful thing. And as we approach Thanksgiving, I wanted to revisit the story of something I’m thankful for every day.

You see, I have a degenerative, incurable eye disease called keratoconus. It’s relatively rare, and the causes of it are still not known for sure. In brief, keratoconus causes a thinning, malformation, and scarring of the corneas, leading to not only the typical bad vision one might correct with glasses or contacts, but also wacky fun stuff like “monocular polyopia,” other streaking and flaring around light sources, and sensitivity to light. Due to the way keratoconus distorts the cornea, once it reaches a certain point vision is not correctable with glasses or soft contact lenses. Hard (rigid gas permeable) lenses are required to, essentially, provide the proper shape for the corneas.

In 2010, my quality of vision and ability to wear hard contact lenses with any degree of comfort had lessened (imagine weirdly blurred vision and sudden, random stabbing eye pains every day and you’ll have my daily life), to the point where my specialist and I were seriously discussing the possibility of corneal transplants.

As you can imagine, I was dreading the possible need for a transplant. The recovery time is over a year, results are not guaranteed, and there’s a 20% chance of rejection, along with risks of detachment, displacement, and infection. So imagine my excitement when my dad found another option.

Remember how I said the disease is incurable? It is. However, my dad had learned of an experimental procedure called corneal collagen cross-linking, which had been in trials for about two years in the United States – 12 years in other countries – at the time. This procedure is much less invasive that a transplant, with a shorter and less difficult recovery time, as well as being less risky. And while it doesn’t fix your vision, if successful it can halt the corneal degeneration, and, in some cases, improve eyesight slightly through rebuilding the bonds between the layers of the cornea.

We looked into it further, and were happy to learn that I was a candidate for the clinical trial. However, the big downside to this procedure was that, due to it still being in the trial stages (only about 300 people had been treated in the U.S. by 2010), my insurance wouldn’t cover it. I would have to pay all $8,000 of the cost of the procedure; not to mention the costs of the medications, lost income from missed work during the recovery periods, and special scleral contact lenses that I now wear (which are, incidentally, what they use in special effects for things like whited-out or black eyes). And the plain fact of the matter was that I did not have the money for the procedure.

Although I had been living with the diagnosis of the disease for several years at that time, I rarely mentioned it. However, this difficulty was so distressing that I wrote about it in my online journal. And then, wonderful things began to happen. The first was that several friends in the broader LiveJournal community of which I am a part through my various fandom interests, including those I knew in person and those I only knew online, asked if they could contribute funds for the surgery.

Although I was touched by the generosity, I was raised to believe I should make my own way in the world, and didn’t know that I could be comfortable accepting the offer. So I called up my wonderful friend Cleolinda to talk it over. As we talked, she wisely pointed out to me that this was an unusual medical situation, and that, basically, yes, if nice friends wanted to help, I should let them. After I agreed with her point, she then surprised me by posting about my situation on her journal, and asking if people might want to help me.

Cue wonderful thing number two. Immediately, people began to donate; and after Cleo posted, Heather, an online friend of Cleo’s who I did not know but have since become good friends with, understood my discomfort with just accepting straight funds and suggested a fandom auction on LiveJournal – in which people could donate fandom or handmade items, and others could bid, and the resulting funds would go towards the surgery, with the donators of funds getting some return value for their contribution. She offered to run the whole thing, and did so with great efficiency, jumping right in to get the ball rolling on setting up a community and spreading the word with Cleolinda.

The auction ran for a little over three months, and was a great success. Many cool items were offered and purchased, many kind good wishes came my way (which meant a lot to me as well!), and by the end of the auction, fandom, consisting of some people I knew but many I didn’t, had raised the entire $8,000. Add to that a few other generous donations from friends who had learned of the online fundraising secondhand (as I still hadn’t really felt comfortable mentioning it outside of the online forum), and my recovery and medication expenses were covered as well. I could hardly believe it, but there it was. This tremendous burden lifted from my life by the kindness of a community.

Seeing fandom come together to help me like that was, and to this day is, one of the most amazing things I’ve ever experienced. I can’t even begin to describe how much it means to me that both friends and total strangers banded together to make it possible for me to see.

I can, however, describe the results (and if you are really interested in the blow-by-blow saga of both surgeries and the results, start from the bottom of this and scroll up. Although Cleolinda’s recap of my first surgery is way more amusing than mine). Although of course the procedure was no picnic and the recovery time was over six months, by the end not only had the deterioration been halted (presumably for good), but vision in my right eye, which was 20/400 uncorrected, had been vastly improved, and vision in my left had improved slightly as well.

On top of this, after the procedure I was fitted for special scleral lenses, sometimes prescribed for cases of advanced or very irregular keratoconus. They are the most wonderful thing imaginable for a keratoconus patient like me. Yes, they are a real annoyance to get in and out, but with them, I am able to see better than I had for about six years prior to the surgery; and there is no pain. So although I still live with the disease (and its quirks, which still include occasional and unpredictable vision problems), this procedure vastly improved my quality of life; and it was all thanks to a group of people who were brought together primarily by their enjoyment of various sci-fi, fantasy, comics, or other genre fandoms, and by the online fandom community that resulted from that enjoyment.

Yes, fandom can be, and in this instance certainly was, a beautiful thing. Not only is my daily life improved thanks to fandom, but my fandom life is as well. As Marvel artist Reilly Brown pointed out when he generously donated a gorgeous Deadpool sketch to the auction, a comics fan no longer being able to see comics would be very sad. Now, not only can I continue to read comics, but I can also continue to pursue favorite hobbies like making tiny clay sculptures. And for those blessings and so many more, I am so, so thankful.

It’s been just over three years since my cross-linking procedures, and even if I don’t say it every day, I am constantly grateful for the help and kindness of those who contributed to those procedures; and I want each of you to know that through your caring, you touched a life forever. And I want everyone else who reads this to know what a great thing happened thanks to a bunch of awesome nerds and geeks and fans and friends caring enough about another one of their community to give something of themselves. I hope one day to be able to pay that forward in some manner. But until that time comes – a Happy Thanksgiving to all, and an eternal thank you to everyone who gave me such an amazing gift to be thankful for.