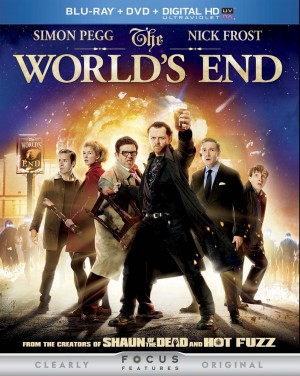 After a steady diet of stupid buddy movies, including this summer’s Grown-Ups 2 flop, I welcomed Edgar Wright and Simon Pegg’s unique take on the concept in The World’s End. After a steady stream of funny and inventive films, this one hewed closer to a traditional premise: five high school buddies reunite for one last blast. However, being from this duo, one could expect something different.

The first forty minutes of the film felt fairly straightforward as the one who refused to grow up gathered his peers, all mired in staid existences, and convinced them to do what they failed to accomplish in their teens. In this case it meant visiting and quaffing a brew at all twelve pubs along the Golden Mile, finishing at the fabled World’s End. We see them struggling to reconnect, all annoyed at their leader for one reason or another. Unlike other films in this manner, the men are archetypal, not caricatures, and you feel the weight of adulthood on their shoulders. Their resentment towards Gary King (Pegg) is also tinged with envy as he has never lost that boyhood spirit, that Can Do attitude that made the next step an adventure.

Then things take an unexpected twist and we’re plunged into an entirely different story that pits these five against an alien threat with the very world’s fate at stake. How they handle this fuels the remainder of the satisfying film, out now on Blu-ray from Universal Studios Home Entertainment. Considered the final installment in the Cornetto Trilogy, viewers should be aware it has absolutely no connection to Shaun of the Dead and Hot Fuzz. What they do share in common is an ensemble cast and smart, witty writing that never trips over the line into dumb humor or slapstick. 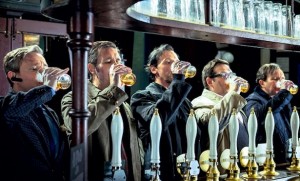 Wright nicely skewers the horror, cop, and science fiction conventions in these films, always taking ordinary people with ordinary problems and sticking them in extraordinary circumstances. Gary King is the boy who never grew up and as an adult, his actions now appear inappropriate but it is his spirit to never give up that forces the others — — Steven Prince (Paddy Considine), Oliver “O-Man” Chamberlain (Martin Freeman), Peter Page (Eddie Marsan) and best friend Andy Knightley (Nick Frost) – into action. The quiet home of Newton Haven is too quiet and the looks the quintet receive from the patrons borders on The Stepford Wives, even their old college professor (Pierce Brosnan) seem s a little off. When King rips the head off a young punk, he discovers the inhabitants have been replaced with robots out to “civilize” humanity.

There’s a tremendous amount of running, fighting, screaming and humor but in the end it all comes down to King and Andy debating the Voice (Bill Nighy) behind it all. As climaxes go, it falls a little flat but is whimsical in a nice way. And there’s even a touch of romance with Oliver’s sister Sam (Rosamund Pike), the sole major female role in the film, a failing on the Bechdel scale. 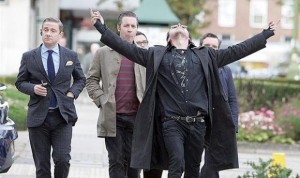 The film’s tone is a steady one, despite the rising complications and activity. The performances are strong as one would expect from the cast, who have worked together for many a year, making this one of the strongest and best comedies of the year. Out on a combo disc (Blu-ray, DVD and Ultraviolet digital), the video transfer is fine, matched by sharp audio. Unlike a lot of recent releases, this one comes with an excellent abundance of material staring with Commentary from Wright and Pegg and Wright and director of photography Bill Pope and Pegg with co-stars Frost and Considine. The first is funny and interesting, the second interesting for technical folk, and the third is as hilarious as you would expect.

U-Control Storyboard PiP lets you see the film’s storyboards alongside the film which is interesting for storytellers. Better is Completing the Golden Mile: The Making of The World’s End (48:00) which takes us through the concept to production although you know some of this through the commentaries.

By all means, check this one out and enjoy the bonus features which enhance the enjoyment.