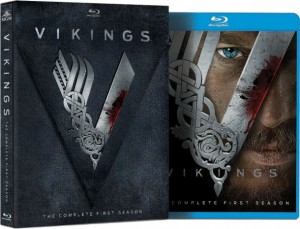 Mining history for fictional fodder has been a staple of television program dating back to HBO’s Rome and now series set across the years can be found on prime time and basic cable channels with more on the way. Whereas some like the CW’s new Reign is laughably inaccurate, others do their homework and mine the reality for nuggets to hang characters and stories on. Most audiences are blissfully undereducated about world history so they will swallow events on The Tudors, Borgias, and others without realizing how many liberties have been taken in the name of dramatic license and television realities.

No surprise then that the venerable History Channel would want to get in on the fun and they wisely picked one of the least known and richest cultures to mine for dramatic fare. Last spring they unleashed the nine part Vikings, a Canadian-Irish coproduction developed and written by Michael Hirsrt who proved to have a flair for the past with Showtime’s The Tudors. The Vikings, living in northern Europe, were fearsome warriors and plied the seas, exploring the world long before Western Europe got around to it. Their largely oral history didn’t get recorded until generations later but thanks to modern day archeology, we have grown to develop a much better understanding of their ways. 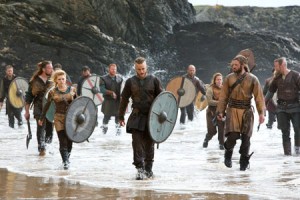 One of the best Vertigo titles of the last decade was Northlanders, also about Viking culture, so I was primed for this series and was not disappointed. Thanks to MGM and 20th Century Home Entertainment, a handsome box set has been released this week. Set in 793, during the earliest days of their recorded raids, Hirst chose to use the real life Ragnar Lodbrok (Travis Fimmel), who, like John Rhys Myers’ Henry VIII is depicted at a much earlier point in his famous life. Here he is a young warrior, raising a family with his wife, Lagertha (Katheryn Winnick).

He desires to ply the seas further west and works with Floki (Gustaf Skarsgård), to develop faster, sturdier longships and then petitions his chieftain, Earl Haraldson (Gabriel Byrne) for petition to make the trip. Despite Haraldson’s refusal, Ragnar, with his brother Rollo (Clive Standen), makes the first trip to Northern England, successfully plundering the land and bringing home the monk Athelstan (George Blagden) as part of his booty. King Aelle (Ivan Kaye) is none too pleased and skirmishes between the two cultures begin.

There’s the usual dash of soap opera elements such as Rollo lusting after Lagertha, who is an able Viking shieldmaiden, but it’s also a more somber, brutal series than Hirst has previously produced. The writing and performances are strong and compelling, making this satisfying viewing. 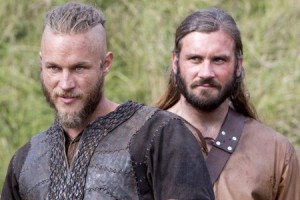 The nine episodes are spread over three Blu-ray discs and you have the option of watching them as they aired on History or in the extended (now with more blood and nudity!) versions that aired in Europe. Visually, both versions are sharp, with excellent color transfer.

The lossless DTS-HD MA 5.1 track means you can hear the wind rush over the waves or the swords cutting into flesh. Trevor Morris’ superb score is never better and enhances the viewing.

The extras contain the needed Season Mode, allowing you to seamlessly zip through the nine episodes and bookmark wherever you stopped watching. There are also commentaries on the first and last episodes, from Hirst and Jessalyn Gilsig, who plays Haraldson’s wife Siggy, on the first, and Winnick and Standen on the second. There are Deleted Scenes that are extended versions of ones that aired in Episodes One and Eight, which means they were likely trimmed for running time reasons Far more interesting is A Warrior Society: Viking Culture and Law (20:48) where Hirst takes us through what is known about the Viking culture, with input from Dr. Anthony Perron, Professor of History, Loyola Marymount University; Dr. Jochen Burgtorf, Professor of History, University of California, Fullerton; and Justin Pollard. Hirst and his cast appear on Birth of the Vikings (17:09), discussing their characters. Forging the Viking Army: Warfare and Tactics (12:11) tracks how the armies were trained for the vicious battles as sword master Richard Ryan and stunt coordinator Mark Henson discuss their work.