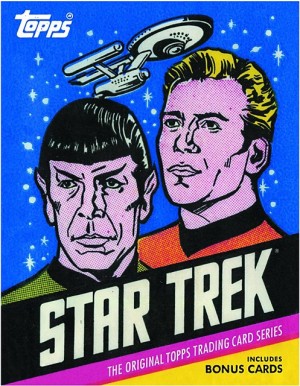 Few fans today recall that Star Trek has been the focus of several trading card sets through the years, beginning with the Leaf Brands series prior to the better known Topps cards from the late 1970s, launching just prior to the first feature film. The far better card series came much later, but as a part of Abrams ComicArts’ series of books focusing on different genre sets from Topps, that series is the one receiving the focus in this attractive book.

The series, which began with Wacky Packages and has included the legendary Mars Attacks and Bazooka Joe, is a worthy examination of the oft-overlooked time capsules of earlier eras. Topps produced cards based on numerous television properties alongside their popular baseball cards since the 1950s, notably their four amazing Batman sets based on the TV series, so it is a reminder of how minimal Star Trek’s impact was during the 1960s by virtue of the fact they didn’t have cards for a decade.

When the card set was finally released, the 88 cads and 22 stickers were culled from whatever Paramount Pictures had lying around, not yet having a fully functioning licensing department with archival graphics. As a result, Topps worked with what they had on hand and that meant all 79 episodes were not represented. And in a bizarre turn of events, George Takei’s Sulu is never seen full-on, instead glimpsed at his station only once.

Paula Block and Terry Erdman, who have mined Star Trek lore in numerous other book projects, have little fresh to reveal about those episodes and wisely devoted their text, accompanying each card in the set, to a little contextually information and quotes from Gary Giani, who wrote the text for the cards and the headline for the front of each. His use of titles of obscure SF films or episodes of Twilight Zone and Outer Limits episodes is subtle and clever, so identifying their sources here makes for fun reading.

In their breezy introduction, they set the stage for the cards and Trek’s place in the pop culture firmament. Giani and Topps’ Len Brown provide context along with fans turned professionals such as Steven M. Charendoff, founder of Rittenhouse Archives.

After nearly 40 years of neglect, Takei gets his due as one of the several newly created cards packaged in the back of the book. This is a nice touch and makes the book all the more desirable. While you won’t learn much new about the show, this is a nice addition to anyone’s library.