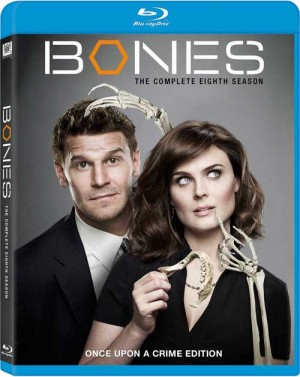 The premise behind Fox’s Bones has always felt as it was straining against credulity. After all, how many bizarre murders occur that require a dedicated team of forensic anthropologists? Well, the answer appears to be eight and counting although with season nine now airing, it’s also starting to sag under its own weight and age. As a result, the cases have taken a back seat to meta stories and character arcs that never feel fully explored.

At the end of the seventh season, Dr. Temperance “Bones” Brennan (Emily Deschanel) took her infant son and abandoned her lover, FBI Agent Seeley Booth (David Boreanaz) and was on the run after a series of unbelievable charges were leveled against her by the sadistic Pelant (Andrew Leeds). We open the eighth season, out now on home video from 20th Century Home Entertainment, several months later as the couple is reunited. However, the Spectre of Pelant, which has been growing over the years, now begins to hang on like an overripe albatross and sucks the life out of the show.

He reappears later in the season, in a far-fetched plot that is designed to rob Jack Hodgins (T.J. Thyne) of his fortune, fueling the madman’s schemes, which also sets up the season’s cliffhanger. The problem is that he’s not a very interesting foe and he always seems to be flawlessly perfect in his execution. After years of building up the romance between Booth and Bones, they have conceived a child and moved in together, forging a life. He finally proposes and then Pelant arrives to orchestrate events that have him call off the deal or innocents will die. Feh.

The only person who seems genuinely happy this year is the boss, Cam (Tamara Taylor), as she engages in a full blown affair with occasional intern Arastoo Vaziri (Pej Vahdat) but she has to keep it quiet because, after all, she’s his boss and there’s a bit of an age difference which never seems to come up.

After more than a hundred episodes, the series is free to take chances and the most satisfying one may be the one that brings back psychic Avalon Harmonia (Cyndi Lauper) and everyone talks to the teen victim’s skull and we see things from its point of view.

Meantime, early in the season we have Angela (Michaela Conlin) question her personal goals which is neatly packed away after only a few episodes while Sweets (John Francis Daley) gets his mini-arc of self-doubt after failing to capture Pelant in the finale.

The series looks fine thanks to the clean transfer to high definition and the sound is also good. As usual, there are some fun and interesting bonus features. There’s occasional commentary from producer Hart Hanson, accompanied by Stephen Nathan and Ian Toynton. There are a few scattered deleted scenes, and Dying to Know: Bones Answers Your Questions! (9:00) as the cast and crew answer fan questions, which also fills Bare Bones: Total Fandom-onium (1:59). Finally, there’s the requisite Gag Reel (5:26).