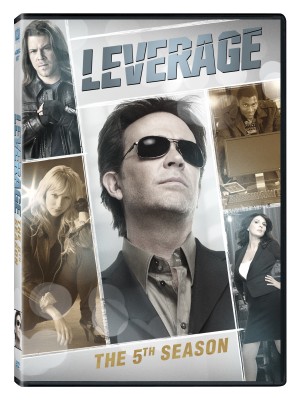 Leverage takes a curtain call this month as 20th Century Home Entertainment releases the fifth and final season on DVD. The four-disc set contains the complete fifteen episode season, which was aired in two batches across summer and winter 2012. Since then, the series has remained in the public eye thanks to three incredibly fun novels along with its well-deserved honor as Favorite Cable TV Drama at the 39th People’s Choice Awards.

Much as we here at ComicMix have adored the show, the audience has been dwindling; opening the final year with 3.39 million viewers and the final drew a smaller 3.04 million, far too small these days to be sustained. However, co-creators Dean Devlin and John Rogers suspected this was the make-it or break-it season and prepared accordingly. From the outset of the season, Nate Ford (Tim Hutton) was up to something and we saw him pushing the other members of the team to either take leadership roles or step out of their comfort zones. The why remained unclear until the very end.

Along the way, though, the series saw the criminals turned good Samaritans relocate from Boston to Portland, setting up shop in a microbrewery/pub now owned by Alec Hardison (Aldus Hodge). At its heart the show has always been about justice and redemption with every character in need of both. For the producers, it was also about shining a spotlight on the sorts of white collar crime and corruption that doesn’t make the headlines with any regularity. As noted in the extensive show by show notes at Rogers’ Kung Fu Monkey blog, the writing staff did their homework and then some, socking away tidbits for later use.

Each week there’s someone who has been cheated and they turn to Leverage, Inc. for help, with one or the other member of the squad taking their case to heart and convincing the others to pitch in. By now they have become a tight team and more than a bit of a family so they remain there for one another despite their idiosyncrasies. Alec remains a control freak and uber-nerd; Sophie (Gina Bellman) has become a drama coach despite her lack of talent on the stage; Elliot Spencer (Christian Kane) is a tough guy/gourmand; and poor Parker (Beth Riesgraf) is still trying to connect with society.

The cases by now have become almost secondary to the actual mechanics of the con and the personal touches along the way. In the steady hands of the strong writing staff and a stable of repeat directors, the show hit a nice rhythm that made for a weekly hour of pure fun. One of the most entertaining this time around was “The First Contact Job”, where director Jonathan Frakes even let them add in a little TNG humor. One of the most interesting from a plot standpoint was “The French Connection Job”, spotlighting Elliot’s softer side. From writing and performing standpoint the second best one of the bunch may be “The D.B. Cooper Job” where the cast doubles for 1971 counterparts as they try to unravel the story of the famed skyjacker. There were others that also tweaked the formula such as “The Broken Wing Job” when an injured Parker recruits the pub’s waitress (Aarti Mann) to help while the others were in Japan.

But it was all leading up to “The Long Goodbye Job”, which aired on Christmas Day but was actually a valentine from the crew to the fans. Suspecting this was their swan song, Devlin, Rogers, and Chris Downey actually conned the audience in a brilliantly executed story. Listening to the commentary track, we discover how much of episode 77 echoed episode 1. It also reset the status quo just in case there was a chance of more stories in the future. And of course, the episode wouldn’t be complete had their nemesis Sterling (Mark A. Sheppard) not made a final appearance.

There’s audio commentary for all fifteen episodes, a handful of deleted scenes, giving you that much more to enjoy, and then a brief gag reel.

The show’s gone, the cast gone their separate ways, but the spirit remains and with luck there will be chances to follow their adventures in some other way. For now, we have the five seasons on home video to enjoy.