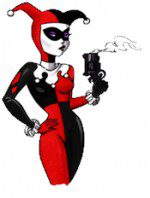 I believe a person has the right to commit suicide. No matter who says what, suicide might very well be our only inalienable right. Sixteen religious leaders, your entire family, all of your friends and all of your enemies can get together, kidnap you and hold an “intervention” (that’s sort of a pop-psych séance), and when all is said and done, you can still jump off a cliff.

But even I would admit that holding a suicide-themed contest is gauche. And, hey, I’m a punk rock fan.

Our friends over at DC Comics (who are now looking up “friend” in their online dictionaries) decided to run a new talent contest. According to their own web page “Harley Quinn is no stranger to a little breaking and entering for a good time and now, she’s going to help one talented artist break into comics with DC Entertainment’s Open Talent Search. That’s right, we’re looking for someone to draw one page of Harley Quinn #0 alongside some of comic’s most amazing talents, including Amanda Conner, Paul Pope, Bruce Timm, and a few other surprises, maybe even you!… If you think you’ve got what it takes to be published in this special issue, then put on your working hat and start drawing now, because an opportunity like this doesn’t come along very often.”

And, from that same page, here’s part of what they want you to draw: Page 15, Panel 4 – “Harley sitting naked in a bathtub with toasters, blow dryers, blenders, appliances all dangling above the bathtub and she has a cord that will release them all. We are watching the moment before the inevitable death. Her expression is one of “oh well, guess that’s it for me” and she has resigned herself to the moment that is going to happen.”

Actually, being familiar with both the character and the issue’s creators, I get the gag. Maybe that’s because the concepts of suicide and death doesn’t horrify me. Or maybe I’ve just got the same perverted sense of humor as writer Jimmy Palmiotti, artist Amanda Conner, and Co-Publisher Dan DiDio. But if you don’t frequent the Comic Book Donut Shop, it’s possible you just might not get it.

Here’s a couple thousand people who don’t get it: The American Foundation for Suicide Prevention, American Psychiatric Association and National Alliance on Mental Illness released a joint statement saying this whole thing sucks. To wit: “We believe that instead of making light of suicide, DC Comics could have used this opportunity to host a contest looking for artists to depict a hopeful message that there is help for those in crisis. This would have been a positive message to send, especially to young readers.”

DC Comics issued the typical mealy-mouthed apology “to anyone who was offended” (I hate that phrase; it sounds like being offended was the object’s fault and not the culprit’s), and Jimmy offered a much more sincere and explanatory apology, which was the right thing to do.

There are a lot of things one can’t rationally discuss in the commercial world without provoking kneejerk overreaction. After a lifetime in youth crisis intervention work, I can safely express the informed opinion that just about everybody who would have read Harley Quinn and then offed themselves already was a basket case waiting to take the pipe. You cannot bring down our mass media to the lowest common denominator.

However, given the fact that we live in a world where parents of a teenage suicide would sue a rock band for being responsible for their kid’s death despite the fact that literally tens of millions of others routinely and safely listened to that same song, DC’s move was unwise.

This column first appeared Monday at www.MichaelDavisWorld, a wonderful place where people speak their minds and everybody but Martha Thomases swears a lot.

Mike Gold performs the weekly two-hour Weird Sounds Inside The Gold Mind ass-kicking rock, blues and blather radio show on The Point, www.getthepointradio.com, every Sunday at 7:00 PM Eastern, rebroadcast three times during the week – check the website above for times and on-demand streaming information. Mike Gold is cool. No, wait. That’s fezes. Fezes are cool. Until the end of the year.