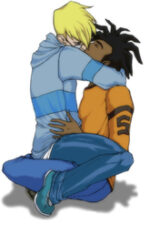 I was sent the accompanying image by a fan that asked me, as co-creator of the character, what I thought of it. The image is of Virgil Hawkins (Static) making out with his best friend Richie. Frankly, it didn’t bother me and I was much more concerned with how this woman got my personal email.

Turns out I gave it to her at the end of my Black Panel at the San Diego Comic Con, which struck me as suspect because she’s not Asian.

Shit, I said I would no longer do Asian girl joke references. OK, let me try that again… turns out I gave it to her at the end of my Black Panel at the San Diego Comic Con, which stuck me as suspect because she’s not pretty.

Actually she’s very pretty so let me try that one more time, turns out I gave it to her at the end of my Black Panel at Comic Con, which struck me as suspect because she’s fat as shit.

Frankly I don’t remember what she looks like and I don’t care. She could have had one eye and weighted 500 pounds. I still wouldn’t care. I see the person I don’t see anything else but the person. I don’t see color, sexual orientation or

religious beliefs.  She must have been way cool because I gave her my personal email.

Speaking of stupid, I posted the image on my Facebook page with the following caption:

Sooooooooo, someone asked me what I thought of this image of my character Vigil Hawkins (Static) kissing his best friend Richie.

It’s fine with me and if it’s not with anyone else I could give a fuck.

A few people assumed I was saying Static was gay. I never said that. In fact one of my friends posted the following, so let me get this straight, Static is gay? To which I replied, no, but I’d be cool with it if he was.

Still even after that a few folk thought I said he was gay.

Derek Dingle, Denys Cowan, Dwayne McDuffie and I created Static. I was lucky enough to be chosen to write the Static bible. That means I created most of the major and supporting characters for the series. There is an expression, writers write what they know and that’s what I did. I based Static on my childhood and my family.

My mother’s name is Jean, father, Robert, sister, Sharon. The family name “Hawkins” is my cousin’s, most of Virgil’s friends were named after members of my Bad Boy Studio mentor program mine, Brett, Kevin and Thor. Their real names were Brett Lewis, Kevin McCarty and Thor Badendyck.

Yeah, I had a student named Thor.

All of those guys are fantastic creators now. Don’t take my word for it, Goggle those Bad Boys (damn, I’m witty) and see for yourself. Brett & Thor’s work will be easy to find, Kevin on the other hand will take a bit more effort. Kevin is like me, you need a key word like “comics” or “Dark Horse” if not then you will end up with about a zillion murderers all named Kevin McCarthy.

Bad Boys Studio has an alumni like that you will never believe. One day I’ll write about it just as soon as I have a heart to heart with Brett about some stuff.

But, (sorry Peter) I digress.

As I was saying, I based Static on my life growing up and as far as I remember I did not grow up gay. I am gay now, I’m a lesbian. I do so love me some women.

Static is not gay but he is black. I do remember growing up black. Some black people especially those in the church have a real problem with homosexually.

Every single time I write anything in support of gay rights some in the black church take me to task. It’s always an angry email, which almost always mentions “role model” for black boys.

I get it. I’m not mad at people for having their beliefs. Really.

Static is based on my life. Mine. Not anyone else’s, mine. Role model? Gay people can’t be role models? Really, shit I guess I have to stop using Michelangelo and Leonardo da Vinci as examples of great artists.

If I’m okay with Virgil coming out as gay does anyone really think I give a fuck what he or she think?

I think with all my heart people should be allowed to love whoever they want to love.

With all due respect, if you create a world famous character based on your life you can get as mad as you want when someone draws a picture of your character kissing someone of the same sex.

However, until you create that world famous character based on your life I suggest you get a life.