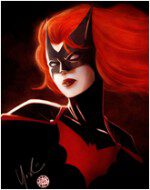 In the last week, DC Comics has made me exhausted. I can’t keep up with my own outrage.

At first report, DC reportedly drove off J. H. Williams and W. Haden Blackman from the pages of Batwoman by decreeing that Kate Kane could not marry Maggie Sawyer, a storyline that they had been developing for more than a year.

How could this happen? DC had always been a leader in creating a diverse universe, or at least it did during my tenure there. We were so LGBT-friendly that I was able to work with GLAAD to get an awards category established for comics and graphic novels when they gave out their yearly prizes. And now they’re going all reactionary? That made no sense. The Internet rumor that they were doing this to suck up to Orson Scott Card made even less sense, and, happily, turned out to be complete paranoid speculation.

Was I going to have to boycott DC Comics, which I’ve been reading for 55 years?

Then, as it turned out, the news story was more complicated. The editorial edict was not against gay and lesbian marriage, but all marriages. I don’t think this is what we had in mind when we wanted marriage equality. The editorial theory is that a married hero can’t be interesting, but instead must be miserable and lonely to have a dynamic emotional life with a lot of story opportunities.

I understand what they’re saying here, but I think it’s lazy. It would be like saying that a hero can’t have a successful career, because poverty has more dramatic potential. However, having an editorial edict about marriage does make it easier to manage the stories from a brand perspective, as potential Hollywood blockbusters. Hollywood loves single heroes, considering them to be sexier and more appealing to the coveted 14-25 male audience. It’s letting marketing trump editorial, and, even worse, it’s letting paranoia about movie marketing trump comic book creativity.

Batwoman is currently one of my favorite books. It’s one that I show people who don’t think they would like superhero comics. Even when the story isn’t necessarily to my taste (Killer Croc doesn’t interest me that much), the artwork is always lushly gorgeous, the lay-outs intriguing, and the characters both enigmatic and engaging.

While I don’t know J. H. Williams, I consider myself to be a huge fan, and it upsets me to see him and his colleague treated so poorly. Editors are an important element of the creative process, and nothing I say should be considered anti-editor. However, it’s bad management for editorial to swoop down and demand changes at the last minute, especially on a story-line that was already approved. It’s no way to treat talent. It’s no way to run a company.

Was I going to have to boycott DC Comics, which I’ve been reading for 55 years?

The latest news as of this writing is that Mark Andreyko will take over Batwoman. I enjoy his work a lot, and, while I don’t think we’ve met, we’re Facebook friends and we seem to share a sensibility. I’m curious to see what he’ll do with Kate Kane, so I guess a boycott isn’t really an option, at least not for me at this point.

Here’s the thing. It’s been taking me longer and longer to read my comics every week. The pile will sit there for days, waiting for me to get interested. I’m writing this on Monday, and the “Villains Month” books have sat there since Wednesday. I’m not sure I care anymore. Treating artists and writers like cookie-cutters has made reading the books a chore. I don’t have to spend money for more chores. Chores surround me, for free.

Nagging about chores is something that ruins a lot of marriages. Way more than being the hero.