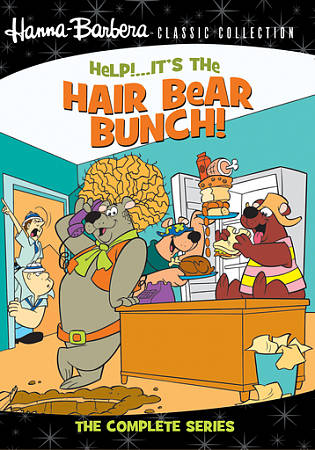 The Hanna-Barbera machine was showing its age by the 1970s. After producing countless hours of programming for the three networks’ Saturday morning schedules, it was clear that the creative juices were drying up. They were also struggling to come with creative variations on the talking animals theme, especially as the hand-wringing parents were getting increasingly vocal about violence depicted on programming intended for impressionable children.

All of which may well explain the not-terribly-original Help…It’s the Hair Bear Bunch series that ran on CBS from 1971-1974 and has been only sporadically seen since. Still, that has not stopped Warner Archive from collecting the complete series and releasing it in a three-disc set.

All the veteran animators, writers, and voice artists gave us a professionally looking and sounding series. It just wasn’t very original or funny or topical. The closest we get is Hair Bear, with his afro, at a time when afros were all the rage. The bears — Hair Bear, Bubi Bear, and Square Bear — operated out of a then- modern looking den with real beds, plus there was a laboratory, television, refrigerator, and even a pizza maker. Like Hogan’s Heroes, the comfortable surroundings were easily transformed back into their prison surroundings. Oddest of all, they used an invisible motorcycle,

The overall premise to the series was that the Bears were trying to escape the Wonderland Zoo or have some sort of adventure. Opposing their plans, of course, is the zoo’s director, Mr. Eustace P. Peevly. In between are the usual assortment of oddballs and comic relief including Bananas the Gorilla, Furface the Lion, Bumbo the Elephant, Slicks the Fox, Hippy the Hippopotamus, Hercules the Hippopotamus, George the Giraffe, Beaks the Pelican, Tiptoes the Ostrich, Gabby the Parrot, Melvyn the Monkey, Hoppy the Kangaroo, Zeed the Zebra, Ollie the Octopus, Einstein the Owl, Arnie and Gloria the Gorillas, Specs the Mole, and Pipsqueak the Mouse.

Typical antics can be seen in the very first show, “Keep Your Keeper” as Hair Bear convinces Peevly he has Zoolerium, thinking he would finally get free until the strict replacement zoo keeper shows up to spoil the fun.

There are sixteen episodes for those who want the complete H-B library but there is little fresh enough to recommend this.