Dennis O’Neil: Of Ben And Fans 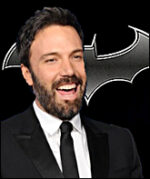 Gawdy laws! What is all the commotion?! Somebody find out about the attack on voting rights? The bloodshed in Egypt? In Syria? The shrinking food stamps program?

Oh. An actor was hired to do an acting job. And a lot of moviegoers are unhappy about it.  Well…

The angst might be a little premature. A special effects film doesn’t find its final form until shortly before it graces your closest multiplex and so we can’t know how casting Ben Affleck as Batman will parse out. We have no idea how the character will be used, where he will fit into the screenplay, whether or not he may have some quality that the filmmakers will find useful.

When the world learned that Michael Keaton had been chosen to drive the Batmobile in director Tim Burton’s 1988 Batman it seemed like a highly questionable pairing of performer and role. But what we didn’t know, all of us inclined to say nay, was that Mr. Burton had his own vision of what the character might be and proceeded accordingly. Not my vision, but a vision that was valid on its own terms. Burton made a pretty good movie and then he made another. Not great flicks, but I’ll generally settle for pretty good.

Unless you’ve been on a digital media fast for the past several days (and if you have, good for you!) you’re aware that the next movie adapted from DC’s comics will team the company’s two signature heroes, Superman and the aforementioned Batman and if I were looking for something to fret about, that teaming would be it. Since both cape wearers are immensely popular, it makes marketing sense for the movie guys to costar them, just as it made marketing sense for the comics publishers to put them under the same covers, way, way back in the 1940s. We all know that more = better. (Don’t we?) But I’m not a marketing guy, I’m an editorial guy, and I will claim that, really, Superman and Batman don’t belong in the same story. There’s a problem of proportion. Superman, at his mightiest, could haul planets around. Batman… gee, he’s real smart and strong and –

– and he doesn’t partner well with Superman. The problems and antagonists appropriate for one are not appropriate for the other. In putting them both at the center of a story simultaneously the storyteller can either ignore the implicit contradictions (or be blissfully unaware of them) or devise separate story arcs for each, different but interrelated, which is how we usually dealt with company-mandated crossovers that had to involve Batman and Superman and whoever else had to be in the mix.

Or – best case scenario – the writer can be so clever and sly and ingenious that he solves the problem in a way that has never even occurred too me.

Casting is a big part of film making – there are highly paid professionals whose sole task is to help directors with the chore – but its not the only part; let us not forget writing and editing and production values and cinematography and locations…

I’ve liked Ben Affleck’s recent work behind the camera – Gone, Baby, Gone is surely one of the best private eye pictures – and so I’m willing to forego prejudging his forthcoming incarnation as Batman and, what the hell, wish him luck.