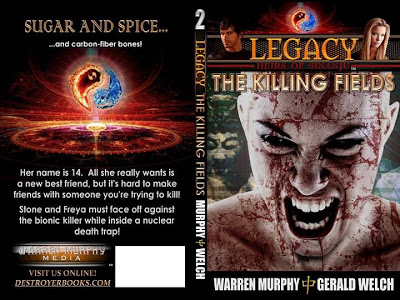 New Pulp Publisher, Warren Murphy Media has announced that volume 2 of the Legacy Book Series will be released this week.

From the Legacy Book Series Facebook page:
It’s time to start saving those nickels and dimes, Stone and Freya fans, cause the second book in the Legacy series will be available for purchase July 31st.

That’s the Amazon paperback version only. eBooks and other channels will follow a few days afterwards!

Here is the inside front cover teaser scene!

A video appeared on the screen, taken from a surveillance camera in a nightclub. Despite the erratic lighting, a woman in a torn dress instantly stood out to Freya as a threat. She knew that the woman was not there to dance — she was there to kill.

“That woman is dangerous,” Freya said. “She’s looking for someone.”

The screen changed back to a close-up of the killer’s face, taken as she turned her head. Though the image was grainy, Freya could see that she was not smiling, as she had originally thought.

Learn more about The Destroyer and Legacy here and here.