Dennis O’Neil: Being “There” 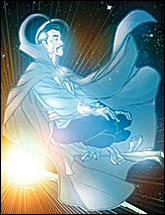 Did you see me there?

Where’s there? Oh, come on…The San Diego Comic-Con! Where else? And, as I type this on Monday evening, are you perhaps just getting home. Are you frazzled? Exhausted? And are you happy? Was the adventure all you’d hoped it might be? Do you have, encased in plastic and two slabs of thick cardboard and tucked into your carry-on, that one special issue, the one you’ve sought for years. the one whose absence has left as yawning crater in the middle of your collection – finally, triumphantly yours? Have you met the person of your dreams, wearing, perhaps, an X-Men costume? Or had your picture taken with the celebrity who occupies a god niche in your psyche? (Okay, it cost you what you pay for a week’s groceries, but some treasures are beyond price.)

Hooray. That’s all well and good. But now the important question: Did you see me there?

If you did, I must have had some Dr. Strangey astral projection mojo working, because I haven’t been anywhere near Southern California this year. (Denver is as close as I got.) So – either I astrally projected (while napping?) or you saw some other septuagenarian chrome dome. I didn’t do any disembodied jaunting last week but…I did do something similar.

The late Arthur C. Clarke once said that any sufficiently advanced technology would appear to be magic to primitive people. (Let’s assume that “primitive” is relative.) Well, abra my cadabra, because while sitting upstairs in the dining room I spoke to a group of people in Lima, Peru – gave a talk and then answered questions. Mr. O the bilocated – at once in New York and Peru! Be in awe, you primitives!

The magic was, of course, technology, and not cutting edge technology, either. (Though, come to think of it, maybe this story would be better if it were.) What we were using, the attendees of the Lima Book Fair and I, was Skype, which is surely old news to many of you. Too me – not so old. I’d used it once before, to record something for use on YouTube, but I had the advantage of a tech savvy offspring at my elbow on that occasion. This time, Marifran and I were pretty much on our own, though we did have help from Eduardo, an affable cyberwizard from – where else? – Peru. I won’t say that all proceeded glitchlessly. (Does Dr. Strange ever suffer interference from, say, a snotty kid riding a Hogwarts broomstick?) But the glitches were minor and the event, I’ve been assured, was a success.

And just recently, a book I wrote about a dozen years ago became available as an e-book. So I guess I’m being dragged into the twenty first century, That, or I’ve taken up residence where eldritch forces are manifest. Either way, as the great prophet Bobby told us, the times they are a’changin’, and, there being nothing to do about it, let’s enjoy the ride.

Did you see me at the Con? Are you sure?