John Ostrander: Man of Steel, Man of the Hour 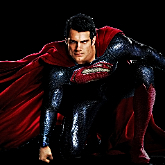 The new Superman movie has been out for some time now and most folks who want to see it probably have and those who want to comment on it probably have. I shied away from Man of Steel as a topic simply because everyone has had their opinion but the questions I want to pose here are at somewhat an odd angle. If you know me, you’re not surprised. Still, there will be spoilers so, if you haven’t seen the film and don’t want to be spoiled, avoid the rest of the column.

I’ve written here and there that the character of Superman needs to be re-examined and re-invented every so often if it is to remain relevant to it time. I think I read the director (Zack Snyder) and/or its writer (David S. Goyer) and/or its producer (Christopher Nolan) say something to the effect that this was their intention. This wasn’t going to be a “comic book” Superman but examine him as if the character was new. Actually, I’m fine with that as an idea. I think any version of Superman still needs to be recognizable as Superman. I would have preferred they kept the red trunks but that’s not necessary to be true to the character.

If Superman is being invented for this time, what does this version of the Man of Steel say about our time?

It is, by design, a dark film. Superman’s costume itself runs dark – the blue could almost be black, the red “S” in his chest shield is more of a crimson. Not only does Superman not have red trunks, there is nothing yellow or gold in the costume. Nothing bright. And yet Superman claims that the sigil on his chest actually means “hope” in Kryptonian. Is this a hopeful film?

Pa Kent, as played by Kevin Costner, is morally ambivalent. He’s afraid that if normal humans know what Clark can do, they’ll reject him. When a young Clark saves a bus full of fellow students from drowning after the bus goes off a bridge, Pa Kent reprimands Clark who asks, “Was I just supposed to let them die?” Pa Kent’s reply is “Maybe.”

Pa later dies, not of a heart attack, but in a twister. Clark could have saved him but that would have meant revealing his true nature. Pa silently and sternly forbids it. And dies. The difference from previous versions is that then Pa dies of a heart attack; there’s nothing Clark could have done. In the Richard Donner film he says, “I have all this power and I couldn’t save him.” In Man of Steel, Clark could have and didn’t. I think that’s significant. The Donner version brings out the humanity in the superhuman and shows his limitations. In MoS, the fact that Clark obeys his father and lets him die when he could have saved him says to me that he has accepted his father’s paranoia. Ultimately, Jonathan Kent is wrong; Superman is accepted by humans, but only after killing a fellow Kryptonian.

That’s perhaps the most controversial element of the new movie. Superman winds up killing General Zod. Snaps his neck. Zod had said he wouldn’t stop killing humans and was in fact about to incinerate a small group of them with his heat vision. Superman begs him to stop but he won’t. So Kal-El kills Zod.

Are we supposed to view this as a no-win situation, to say Superman had no other choice? Does that make it acceptable? Superman immediately feels horrible but was there really no other way? Are meant to agree, to empathize, in this era of “acceptable collateral damage”? Or should Superman be better than that? He was in the past; does this make Superman more realistic? Is that what we want? Is that what we need? Is that who we are?

I was talking recently with Mary’s friend Sherry (a lovely person) and her ten year old grandson, Gavin Simpson. He had seen Man of Steel and I was curious about his reaction; ten years old is the prime time for becoming a Superman fan.

Gavin has seen the other Superman films and knows about the comics but this would be his Superman – the one he sees on the big screen when it first comes out. He liked it but he didn’t love it; he said that the fight scenes at the end went on too long (I agree). He also felt that Henry Cavill, the guy playing Kal-El, didn’t project enough of Superman’s essential goodness. That’s an interesting point.

Most tellingly, when I asked Gavin about Superman killing Zod, he didn’t care for it. When I asked him why, he was clear and firm: “Superheroes don’t kill.”

These days, evidently they do, including the first, brightest, and the most iconic. It makes everything more realistic. It makes Man of Steel the Superman for our time, according to those who made the film.