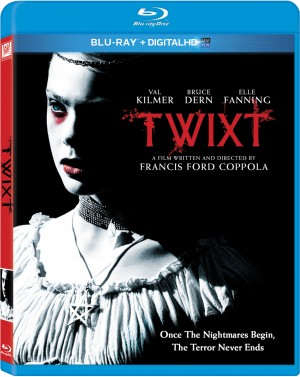 TWIXT follows Hall Baltimore (Kilmer), a writer on a book tour who uncovers a disturbing murder that could be source material for his next novel.  But as Hall investigates the killing, he finds himself confronted by chilling nightmares, including the ghost of a young girl (Fanning). As he uncovers more horrifying revelations, Hall discovers that the story has more to do with his own life than he could ever have imagined.

The TWIXT Blu-ray and DVD includes an exclusive forty minute documentary on the making of the film by Gia Coppola.

ComicMix has two copies to give away and all we need you to do is answer the question below by 11:59 p.m., Monday, July 22. The decision of our staff will be final. Open only to US and Canadian readers. In order to win your very own copy of Twixt on Blu-ray, simply answer the following question:

Which actor portrays Hal Baltimore in the film?