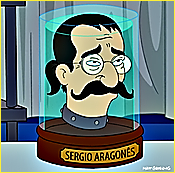 Way back on August 26, 2010, Futurama gave us a look at the San Diego Comic-Con that will be held one thousand years later. Of course, everything about San Diego grew during the ensuing millennium – except for the San Diego Convention center. Oh, and the number of comics-related guests was reduced… to one.

Fittingly, that one was Sergio Aragones. I have no doubt that somebody will still be uncovering unpublished Aragones art in 3010.

More than a quarter of a million people pay to attend the annual SDCC. Yes, they have a registered trademark on the word “Comic-Con,” but since that term had been in common usage long before they applied for the mark, and is still being used by other shows across America, in my opinion this is theft. As a former promoter of a “Comicon” – the Chicago Comicon, from 1976 through 1985 – I will gladly testify on behalf of anybody who chooses to challenge this mark.

The show is supposed to be about comic books. It is a non-profit show, and it is a tax-deductible 501(c)(3) organization. Its mission statement is: “Comic-Con International: San Diego is a nonprofit educational corporation dedicated to creating awareness of, and appreciation for, comics and related popular artforms, primarily through the presentation of conventions and events that celebrate the historic and ongoing contribution of comics to art and culture.”

All those people, along with the press, the guests, the celebrities, and the exhibitors, occupy a building built to safely house a fraction their number. How the fire department certifies them is beyond me. Sardines would feel crowded on that convention floor, and if you suffer a heart attack or a stroke while there you had better have filed a will.

It’s because the next time some clown slaps me in the face with his backpack, I am going to take said backpack and shove it up his ass while loudly singing the Super Chicken theme song.

Not that we won’t be well-represented at the convention. ComicMixers in attendance will include Michael Davis (who will hate me for writing this column), Glenn Hauman, Adriane Nash, Marty Pasko, Sara Raasch, and Emily S. Whitten. I’m not certain about Denny O’Neil and Bob Greenberger. The rest of us are staying put… although Martha Thomases will be travelling over 6,000 miles in order to stay put. That’s a neat trick.

So feel free to approach any of these folks – most of us don’t bite, unless you’re wearing a backpack – and tell ‘em what you like about ComicMix and what you don’t like and what you’d like to see. Ask about ComicMix Pro Services, but do your homework: click on that big ol’ button up there at the top of this page.

But there’s another reason I’m staying out east this week. Those of us staying behind in New York City?