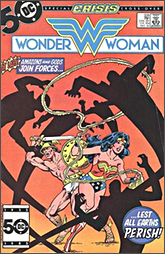 As I was saying …

And as for Diana …

Well, perhaps “hate” is too strong a word. I didn’t hate her, exactly. She made me, um, “uncomfortable.” Even as a kid reading her adventures. Not being old enough at the time to put it into words, to analyze my reaction, I figured it out as I got older.

I loved the stories that took place on Themiscrya, aka Paradise Island. It wasn’t just that I was a mythology geek – I read Edith Hamilton’s Mythology: Timeless Tales Of Gods And Heroes when I was eight years old – but that in these stories Diana was in her true element. Unapologetically independent, intelligent, strong, and self-assured, Diana was a hero who inspired. She lit up my imagination, and along with her fellow Amazons, became a role model, an icon for a little girl who thought she might become a veterinarian, a neurosurgeon, an astronaut when she grew up.

But when Diana was in “Man’s World,” she wasn’t such a, well, Wonder Woman. She had to hide her independence, her intelligence, her strength, and self-assurance in the guise of a meek Air Force secretary. She was the only powerful woman in the DC universe whose nom-de-guerre wasn’t borrowed from a male counterpart, and all she did was whine about Steve Trevor.

No, she was definitely not an icon for women in the later part of the 20th century.

An aside here, along with an apology to those regular readers of this column who already know this. When I was a prepubescent girl, it was Kara Zor-El, a.k.a. Supergirl, who really did it for me. Think about it. A twelve-year-old girl was Superman’s secret weapon? (How many times did she pull his Kryptonian ass of the glowing green fire?) Now she was a role model for a young girl growing up during the Silver Age.

Back to my writing gig as the first woman to be the ongoing writer of Wonder Woman:

I was unable to write Diana the way I really wanted to – as an interesting dichotomy. Here was a supremely intelligent, superbly physical young woman who didn’t know shit about life in the “real” world. A royal princess who was waited on hand-and-foot while growing up who now found herself in a nation that had rejected royalty at its birth. The only baby “born” in a civilization of women who had isolated themselves from the rest of humanity 2000 years ago, so of course she would be “pro-life” and “anti-abortion.”* How would she react to a world where women were just starting to break the glass ceiling, where they made 70 cents to every dollar a man earned? (Still do.) How would she understand a country that went nuts just because Hillary Clinton didn’t want to just stay home and bake cookies?

And as for men? How many men had she known? Besides Zeus and Ares and Apollo and Hermes, I mean. She had no experience with them. Had she ever actually seen a penis outside of an anatomy lesson?

And would she even be interested in men? Frankly, I thought (and think) her background would lead her to be a lesbian, if only because that was her template. And that could also bring up lots of different things: nature vs. nurture, genetic disposition vs. environment. (I hear that Grant Morrison’s Wonder Woman opus is going to explore this, which makes me Extremely Jealous And Pissed Off That I Never Got The Chance To Do This.)  And if she realized that she was heterosexual? Could make for some interesting situations as she started meeting more men of the mortal variety. As I said, until she came to New York, the only men she had ever had any kind of relationship with were her gods. (Okay, there was Steve – what a jewel.)

I started to regret ever taking on the whole assignment. I felt I was turning out crap. I was embarrassed. I was sad. I worried about my future as a comics writer. And finally…

I will never forget the day it happened. I was arguing with editor Alan Gold. And something in me simply exploded…

I slammed the door as I left. I walked out to the elevator. I pushed the button. I was fuming. I couldn’t wait to get out of there.

And then Marv Wolfman came out to the elevator lobby and talked me down. (Should I bless him or curse him? sigh) He must have thought that I had talent and/or a future as a writer; he convinced me to keep going, not to quit, and he got me to go back into the office. He even got me to apologize to his friend, Alan. A miracle, I must say.

So I finished the run.

And my reputation as a “difficult bitch” began.

*This has nothing to do with my own feelings. For the record, I am firmly pro-choice.

**Little did I know that I was not done with Wonder Woman!