REVIEW: Justice League #22 – When The Tale Wags the Dog 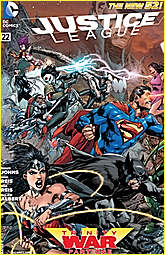 In all fairness, it’s a heck of a setup issue – the battle lines are drawn, it is made abundantly clear the stakes are high, and there are wheels within wheels of which few of the players are aware. It’s a book that absolutely brings you back next week to see what will happen. Geoff Johns is a master of this – he weaves a long-form plot into his books that all ties up into bows whenever he chooses to pull the plot threads. I don’t think he’s ever written a book that didn’t delight me in all his years at DC.

Add to that his wonderful ability to pull obscure characters and plot threads out of the distant past and make them relevant and exciting today. We saw the Shaggy Man make his debut in the New 52 recently, and in this issue we see the on-screen premiere of The Outsider, an old Batman villain (and a long story in and of himself), and a variant version appearing in the Flashpoint minis, written by James Robinson, the mini which I went on record as being my favorite of the bunch, and the one “new” character I said I’d most like to see find his way to the New 52. I’ll be curious of the details of this new iteration of the character.

Having said that, the book had several things going on in the book that I found infuriating, more as a reflection of what’s going in comics in general today.

We saw two characters (seemingly) die in the book – one brand new and one very old. Old Firestorm villain Plastique took out Madame Xanadu, and thanks to The Outsider’s manipulations, Superman seems to have killed the brand spanking new Doctor Light. The former is annoying because of the legacy of the character, the latter, not only because the character was seemingly created solely to be killed, it’s another minority character to have been used in the same fashion. Geoff caught some hell for a similar scenario in Aquaman – a new character of middle eastern descent was killed off in her first adventure – a flashback, no less.

I say “seemingly” because a sub-issue is while DC has sworn blind that the new status quo is “dead is dead,” they don’t seem to mind swerving the readers with the heavy suggestion that a character has died only to reveal the next issue that they’re fine, it was just a flesh wound, they switched at the last minute, etc. Now that’s a tried and true device, used endlessly in the Republic serials, but as Annie Wilkes explained, it’s not good storytelling, it’s cheating. Catwoman never got into the cockadoodie chair.

So it’s entirely possible that Madame Xanadu teleported, or was teleported away, and that Doctor Light will return with even more amazing powers and a serious mad on for the heroes. But the point is, the moment was designed to shock us, provide a hotshot to get us back for the next issue, as opposed to creating a solid dramatic moment. In a documentary, Hitchcock talks about the difference between shock and suspense: one provides a moment of excitement that passes quickly, and one provides a long scene of emotional duress that people will talk about for a long time. Both of these deaths were mere moments. And if they turn out to be false alarms, they’ll be empty moments.

Literally and figuratively. Event crossovers, mini-series, any story, really, but finite, limited stories should have a beginning, a middle, and an end. There’s lots of opportunity to lay plot threads that can be returned to should the need arise, but time was you’d close the last issue and think “That was a good story.” Or at least, “That wasn’t that good, but at least it’s over”.

The Empire Strikes Back may be the first example in modern narrative where that didn’t happen. They already knew they were making a third film, so there was less of an impetus to make the film end definitively. It didn’t really end – it just paused for three years.  Everyone was safe and all, but there were so many questions left unanswered it felt more like a season finale than a film.

So too in comics, the event / maximegacrossovers don’t quite end as much as they seem to just lead straight into the next one. The defeat of the Big Bad only serves to set up the next one, and not even in a few months – sometimes right at the end of the last issue. Marvel’s been doing this for some years now – each big event would set up the next, and the event wouldn’t quite…end, it’d just say “Join us for next event in a few weeks!”

Geoff Johns had been writing one big long story in Green Lantern, one that included several huge crossover events. But they were all discrete, they ended, they had winners and losers, and there was a sense that something had been achieved.  Even if the next big plot point was teased at the end, it was given months, even years to grow and bloom.

DC has done a couple of these in the past. The Oracle: The Cure mini-series had an overcrowded mess of a climax (what pro wrestling fans refer to as a “Schmoz” finish) that literally ended with “The story continues in Batgirl #1!”  James Robinson’s much maligned mini Justice League: Cry for Justice(!) Seemed to have gone through quite an overhaul – originally pitched as a more “pro-active” League, it quickly turned into nothing but a springboard for Green Arrow’s new plot twist. AND it was chock full of death that only happened to make the main characters angry and “Justice!”-yelly.  James was good enough to un-do one of the more egregious demises, and did it well.

This is DC’s first attempt at Marvel’s “direct flow” format in a big way, but at least they’re being fair about it. We’ve already been told, clearly and distinctly, that the events of Trinity War will cause the villains to win, which will be portrayed in September’s Forever Evil event, and the “villains month” of books. We don’t know “The ending” per se, but we do know that it won’t be an ending, per se.  It’ll be a direct segue to the next event, and a very expensive event it’ll be, if you’re the type that likes to get every part of the story.

It effectively changes Trinity War from the main event to a mere prologue to the next event. I do not expect many plot points to resolve here, save for the various teams realizing they need to team up to fight the real threat. I expect the actions of Superman to be explained to the public very quickly and quickly forgotten, far different from the way they dealt with Wonder Woman’s killing of max lord in the last universe, and the stellar way Gail Simone is dealing with the death of her own brother, and Commissioner Gordon’s (a.k.a. her father) witness of the act.

The Roots Are Too Deep

There’s nothing wrong with foreshadowing. It’s the sign of quality literature. Before Crisis on Infinite Earths, they teased The Monitor in DC titles a full year ahead of time.  In this event, at least one title, Justice League America, seems to have been set up for the express purpose of setting up this event.  It exists not because there was enough demand for a third JL series (tho sales suggests the audience was happy to accept it), but only to serve as a place to put all the plot that would be needed to have Trinity War make sense.

This has been happening for some years now. Dwayne McDuffie’s run on Justice League was severely hindered by Editorial asking him to shoehorn in plot points that only served to set up an upcoming event, and in some cases, being asked to step aside entirely for a couple months.

There’ve been more than a few examples of Editorial getting in the way of the creators since the New 52 came to be as well, many of them ending in creators leaving said books, willingly or no. There’s nothing wrong with an Editor wanting to work with the writer on the stories. When the editor starts taking more of a role than the writer, conflict is almost certainly to follow. There hasn’t been an editor good enough to do that in several decades, and I don’t see one coming along anytime soon.

There’s every ability for a writer to turn out a great story, even if any or all of these issues appear.  I fully expect to enjoy the rollercoaster ride that Geoff and his cronies have set up. But it’ll be in spite of what I describe above, not because of them.