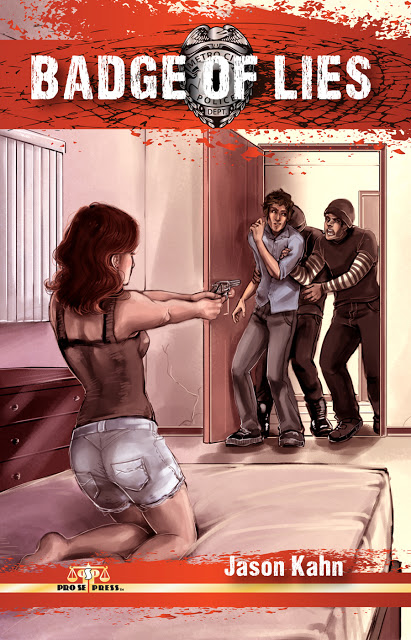 “Pro Se prides itself,” Tommy Hancock, Editor in Chief and Partner in Pro Se, states, “on providing a wide variety of Genre and Pulp Fiction for readers to take advantage of.  BADGE OF LIES from Jason Kahn is the next great step in doing that.  Equal mixes of police procedural, crime novel, two fisted pulp, and shadowy noir, this novel also explores several deep themes, including the bond of friendship, the choices a person makes that define them, and the extreme grayness that morality can become.   Jason captures each and every character with an almost instant photo type quality- you see them as they exist fully in every moment- and then masterfully pours them together into this hard hitting, fast flowing narrative.”
In BADGE OF LIES, Metro City Detective Frank Arnold has just buried his partner and best friend.  Arnold soon learns that Mitch Connell may not have been the man Frank thought he was.  And Arnold cannot drink away what’s coming.
BADGE OF LIES peels back the hard bitten exterior of two men– One, a recovering alcoholic detective who’s just laid his best friend to rest, the other the dead friend and all the secrets he tried to carry to his grave.  Secrets that Frank Arnold is left to deal with.  Like the grieving mistress who winds up dead.  Ties to organized crime.  A cryptic warning from beyond the grave telling Frank he’s in trouble and not to trust anyone.  This is the legacy Mitch Connell leaves his friend, a legacy that sends Arnold into a crazy game of suspicion, pursuit, and murder.

“Badge of Lies,” Kahn explains, “is a story of trust and betrayal, of a good cop who has to do bad things to make things right. Thanks to Pro Se Productions for making this possible, and I hope everybody enjoys the ride!”
In Frank Arnold, Kahn creates a character hard boiled enough to walk fictional streets with Hammett’s and Chandler’s creations! A cop hardened by the job, toughened by the very crime he fights, Arnold will stop at nothing to discover the truth about his partner’s death and stay alive in the bargain.
Can a good cop survive in the big city or does he have to wear a BADGE OF LIES?  Modern Crime Prose from novelist Jason Kahn with an evocative cover by Mariana Cagnin with Fitztown and design and print formatting by Sean E. Ali and eBook design by Russ Anderson!  BADGE OF LIES from Pro Se Productions!
Available in print for $15.00 from Pro Se’s store at https://www.createspace.com/4313160, via Amazon at http://www.amazon.com/Badge-Lies-Jason-Kahn/dp/1490367241/ref=sr_1_1?s=books&ie=UTF8&qid=1372262015&sr=1-1&keywords=badge+of+lies, and at Barnes & Noble at http://www.barnesandnoble.com/w/badge-of-lies-aaron-kahn/1115568764?ean=9781490367248&itm=1&usri=badge+of+lies!
Also available as an EBook for only $2.99!  Get it for the Kindle at http://www.amazon.com/Badge-of-Lies-ebook/dp/B00DC6Z4MS/ref=sr_1_1_bnp_1_kin?ie=UTF8&qid=1372262117&sr=8-1&keywords=badge+of+lies, on the Nook at http://www.barnesandnoble.com/w/badge-of-lies-aaron-kahn/1115568764?ean=2940016651071&itm=1&usri=jason+kahn, and in most formats at http://www.smashwords.com/books/view/325508!

For interviews, review copies, or more information on this book and Pro Se Productions, email Morgan Minor, Director of Corporate Operations, at MorganMinorProSe@yahoo.com and check out Pro Se at wwww.prose-press.com and www.prosepulp.com!
Share