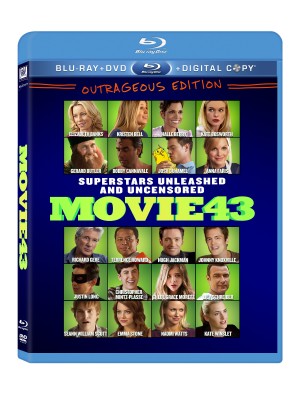 Growing up in the 1970s, there were plenty of movie parodies that broke down into two camps: the really smart ones that required a familiarity with film and culture (Blazing Saddles, et. al.) and those that were outrageous fun (Kentucky Fried Movie, The Groove Tube). The latter also showcased up and coming talent before and behind the camera, shooting on a shoestring so the studio had a low-risk offering. The other thing the latter films offered were the vignette approach, letting different creative types strut their stuff, making for an uneven but generally entertaining experience.

That same approach was recently used (and Kentucky Fried Movie cited as an inspiration) to mount the not very good Movie 43, out now on disc from 20th Century Home Entertainment. The difference is that it was made by a ton of talented, pedigreed cast and crew yet still managed to be offensive, unfunny, and amusing. The overall production lacked wit and the directors didn’t get much out of their cast.

The film is framed with a demented man (Dennis Quaid) threatening a studio exec (Greg Kinnear) with death unless he heard his pitches for the ultimate feel good movie. Each pitch led to a vignette and then back to the frame where things were escalated. In some ways, the frame is the most interesting aspect of the film as we got to see the Stockholm syndrome play itself out.

As it turns out, the most polished of the short pieces was the first and was shot to secure everyone else’s participation. A woman (Kate Winslet) goes out on a blind date with the city’s most eligible bachelor (Hugh Jackman) and as they sit to dinner, she realizes he has testicles attached to this neck. Everyone is oblivious to this physical manifestation but she cannot take her eyes off them and supposed hilarity ensues.

There are 12 directors and 43 actors (get it?) so the shorts are wildly inconsistent but often tread just over the line of good taste with crude language, playing with social mores and taboos, and never quite knowing when to end it. The cast is game although none are given a chance to play with their screen types, instead, are asked to inhabit genuinely clueless or unlikeable characters. A recurring theme in the sketches is how clueless (and tasteless) some people are so rather than guffaw you tend to go “ewwww”. The worst may be the faux-Batman (Jason Sudekis)’s description of faux-Supergirl (Kristen Bell)’s nether region to an embarrassed Robin (Justin Long). The set-up is amusing but played all wrong so is annoying rather than funny (and totally wastes John Hodgeman as the Penguin). Runner up is Chloë Grace Moretz in the uncomfortable situation where she has her first period in a household of male clichés who freak out or don’t know how to handle the delicate situation (although it ends with them watching a commercial that is actually funny).

The package comes with a Blu-ray, a DVD, and a digital copy. Perhaps most interesting is the Blu-ray which comes with an alternate version, one shown overseas, that uses a different framing sequence running several minutes longer, and is less funny. The sole other extra is a cut sketch with Julianne Moore and Tony Shalhoub as parents asking an off-screen investigator to help find their missing daughter, who was glimpsed on a  Girls Gone Wild-style video Mr. Shalhoub just happened to order and repeatedly watch. The gimmick is that girl has a tendency to flash the camera in Christmas cards, high school yearbooks, etc. A short with Anton Yelchin as a necrophiliac was shot and promised for the disc but is missing.

A great premise, gathering some of today’s funniest people (headed by Peter Farrelly) and top stars to have some fun, goes nowhere and is not as clever as the crew think it is. A serious misfire of a film which sank without a trace at the box office.