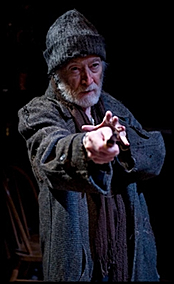 My very good friend, William J. Norris, is an excellent actor, a wonderful director, an inspiring playwright (I wrote my first play because I really admired a play that he wrote and that led, in turn, to my writing career), and one helluva teacher. I should know. I’ve stolen cribbed borrowed applied so many ideas and concepts from his teaching into my own attempts.

I met him one night for drinks after he taught an acting class and he told me that a student came up to him after a session and asked Bill if he thought the student could act. Bill said, “No.” William J. says that every time a student asks him that question, he gives the same answer. That seemed a little brutal to me in this nurturing, everyone-wins-an-award-for-showing-up era we live in. Bill said he was being kind; the life of an actor – of any artist, actually – is hard enough and if someone can be talked out of it, they should be.

In my own theater days one of sidelines I pursued, on occasion, was that of a freelance actor coach, focused on helping someone with their auditions. It was surprising how many actors (and I include myself overall in this) let their sense of self-worth hinge on whether or not they got a call-back or were cast in the part. The whole artistic process is too narrow a reed on which to hang so weighty an existential question – do I have worth?

I encounter a variation of this at the lectures on writing.

There’s a right answer but it’s also a trick answer: “Yes, I’m a writer. I’m a good writer. Not as good as I want/going to be yet.” That’s the right answer.

Here’s the trick part: you have to mean it. You have to believe it. If you don’t, why should anyone else? You have to have conviction.

I’ve sometimes compared writing – or any creative, artistic endeavor – to a circus. Sometimes you are on the high-wire, working without a net. You put one foot in front of the other and you don’t look down.

Sometimes it’s like being the clown car; you putter into the central ring and then all of these strange, absurd, maybe wonderful beings come out of you. If they don’t then you’re just a stupid little car in the spotlight. You have to trust in your inner clowns.

You don’t ask whether or not you can write. If you have to ask, then you can’t and won’t. It doesn’t matter if it’s the best thing anyone has ever written or even if it’s the best you have ever written. You put the words down and you decide later if you like them. You have to believe in your talent. You’ll figure out later if the writing is good, bad, or indifferent. For now, you’re writing and that’s what a writer does. A writer writes.